Strangers ‘Til We Meet 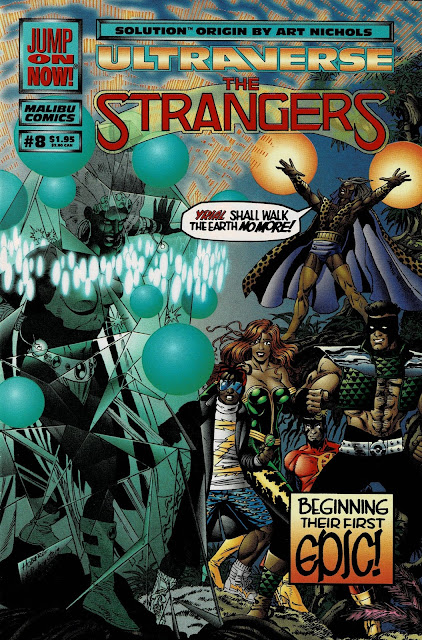 In July 1993, comic companies released over 600 new books. That shattered the previous monthly release record set in the medium’s 1950s heyday, when the comic book industry was at its most popular and diverse (in terms of genres of comics).

In 1993, most of those 600 books featured superheroes. This cornucopia was directly attributable to the new companies and new universes I talked about in essay #19, but also to Marvel’s response to that competition, which was that they flooded the market with titles in order to monopolize rack space.

See, most comic stores had enough space to display about 200 new books per month. That meant all of those other 400 books would have to be special-ordered or not ordered at all. Companies couldn’t rely on customers discovering their books in the shop. They had to stand out.

Some of these companies did a better job of getting themselves noticed than others, but the best self-promoter was Malibu’s Ultraverse line.

Malibu had previously acted as a publisher for the Image books, but that company had broken away in early 1993. It was a blow to Malibu, but their association with Image had left them flush with cash, which they used to fund the Ultraverse. It’s somewhat ironic that this new universe was so directly tied to Image, because they positioned themselves as the anti-Image.

Instead of arising from artists, the Ultraverse was created by writers. And they weren’t new writers either, they were veterans who had worked on Marvel and DCs biggest properties: Steve Englehart, Mike Barr, Steve Gerber, Gerard Jones, James Robinson, James Hudnall, and Len Strazewski. In promotional interviews they touted how closely coordinated and interconnected the Ultraverse would be, as opposed to the slapdash Frankenstein that was the Image universe. Though they hired some very high-profile artists (Dave Gibbons, Howard Chaykin, Adam Hughes, Walter Simonson) to design their characters, the art on the books was not part of the sales package; most of the books’ regular pencillers were solid and workmanlike, the opposite of the flashy Image artists. They were not the draw, the writers were. 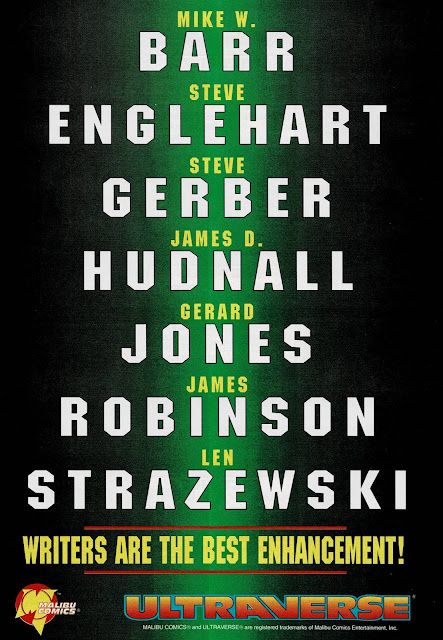 The Ultraverse debuted in June 1993 with three titles - Prime, Hardcase, and The Strangers - but quickly expanded to over a dozen ongoing books. Malibu put an obscene amount of effort (and cash) into marketing the books. Utilizing their film division, they created a promotional video for retailers, live action mini-movies for the characters Hardcase and Firearm, and TV commercials. There were also radio ads and posters on buses, in addition to extensive print ads in all of the comic-related publications. They announced plans for action figures, cartoons, video games, and a trading card set all before the first books had hit the stands.

And it worked! In the great glut of titles of 1993, the Ultraverse became a hit. While several of the new universes didn’t last through 1993 (and indeed, many of Image’s non-core titles were short-lived), the Ultraverse expanded and became stronger. By January of 1994, the comics market had contracted considerably, and was down to around 350 titles, but a good 20 of those were Ultraverse comics.

I hopped on to the Ultraverse enthusiastically at first, lured by the promise of a writer-driven line of books. Though I loved comic book art, I had been burned enough times by nonsensical Image books to know that a great artist did not necessarily make for a great comic. So I dabbled with every single Ultraverse book before settling on a few favorites: Prime, Freex, Strangers, Ultraforce. 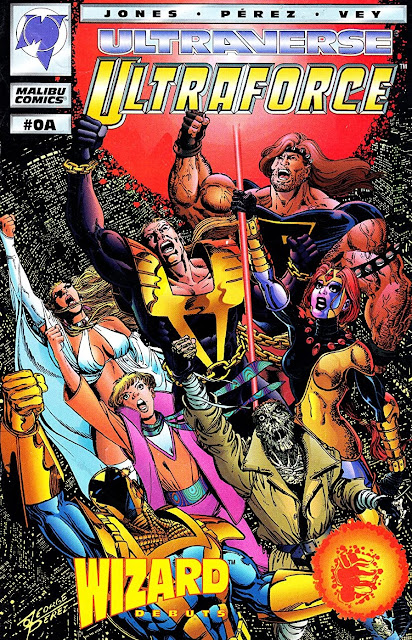 I was excited to revisit these for this project, and to take a second look at some of the titles I’d abandoned early on (Firearm, Sludge, Prototype, Night Man). I was dismayed by what I found. With a couple of rare exceptions, the Ultraverse books were just a big old mess. The art was inconsistent, the characters unlikeable, the concepts muddy, the stories rushed, the attempts at realism unrealistic. Only James Robinson’s 18-issue run on Firearm had any sort of narrative consistency and coherence, but even that title was troubled by a revolving door of artists and a protagonist who racked up a body count without much reflection or remorse.

The title I found myself most disappointed by was Steve Englehart’s The Strangers. I remember really digging the book when it first came out, but this time I found it just a slog to get through, and I had to struggle a bit to understand why. On the surface this story of six random San Franciscans who develop superpowers after a cable car accident has all the right elements: a great artist (Rick Hoberg), a diverse cast of characters with interesting powers, and a creator who’d guided some of the biggest characters at Marvel and DC (Fantastic Four, Avengers, Batman, Justice League, Green Lantern Corps).

First, the positives: The book went directly against the trend, both inside and outside the Ultraverse, of darkness and graphic violence. Its characters were optimistic and heroic. There were two Black main characters (Zip-Zap and Yrial) and the leader of the team was a Latinx woman (Lady Killer). Another member of the team (Spectral) was openly gay, and he had a very cool and clever ability that gave him a different power for each color of the rainbow he glowed. 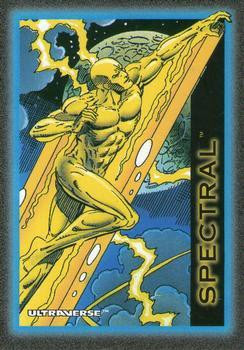 Hoberg's art was marvelous, and, even with the occasional fill-in, consistent. Hoberg had the makings of being one of the greats, but outside of the work on this book and a smattering of DC titles, he never really made comic books his home. Instead, he worked in storyboarding and design for both animation (X-Men: The Animated Series) and live-action (the 1990 It mini-series).

But despite those elements, the series just isn’t that great, and it all comes down to plotting and pacing. In presenting a new set of characters to an audience a writer has to find ways to build familiarity and make the reader care. Englehart didn’t start doing any of that work in earnest until the title was over a year old. Maybe he thought he had more time (the series was cancelled with issue #24), or maybe he felt he had to do lots of exciting things right away to hook readers in. But as we’ve seen, it doesn’t take much time or space to do this kind of character work, if you do it right (I refer you to Quasar #31 and X-Factor #87).

So The Strangers is full of intriguing premises that are never satisfactorily explored. One of the team members, Candy, is an android sexual companion who enters into a romance with another Stranger, Grenade. There are all sorts of complications and explorations that could arise out of this, but instead they just flirt and do PDA with each other. Zip-Zap is a 12-year-old orphan and former gang member, but this potentially-rich backstory is just thrown out sort of causally and never really expanded upon. And it seems like a huge missed opportunity to not structure the book around the Strangers tracking down the other 40-some individuals who were on the cable car with them. As it is there were only two stories that arose from this set-up, and only one did so in a meaningful way.

It strikes me now that the Ultraverse really wasn’t as far away from Image as it purported to be. Yes, it was writer-led instead of artist-led, and yes, the Ultraverse had more intriguing concepts and premises than Image did, but the end results weren’t all that different. Both companies put out books that were overly busy and needlessly grisly. Both companies prioritized story momentum over character development, featured poor design work, and lacked for compelling villains.

Unlike many of the other new universes that sort of sputtered out, the Ultraverse actually got a second life, thanks to Marvel. In late 1994 Marvel bought the Ultraverse from Malibu. Marvel was struggling, and grasping at straws. There were rumors that they bought the Ultraverse to get access to the coloring process Malibu used on the books, but that has been disproven. Other, more credible, rumors that said the purchase was to block DC from buying the characters.

Regardless of the reasoning, the effect was immediate. A mini-series called Godwheel featured Thor and a bunch of Marvel artists, including Joe Madureia, Gary Frank, and Mike Wieringo. A series of crossover specials (e.g. Prime vs. Hulk and Night Man vs. Wolverine) culminated in an Ultraforce and Avengers crossover with Loki as the villain and George Perez on art, the result of which was the rewriting of the Ultraverse. Many of the original titles ended, and the line relaunched with seven books in late 1995 (The Strangers was not among them). Marvel shut down the Ultraverse for good with February 1997’s Ultraverse: Future Shock. By that point, none of the original creators of the line were involved.

While many other successful superhero universes of the 1990s have made some sort of return in recent years (Valiant, Impact, Milestone, New Universe), Ultraverse has not. Apparently a circa 2004 proposal from Englehart sputtered out due to the fact that the original creators would be owed 5% of profits from the revival. In a 2005 Newsarama interview, then Marvel editor-in-chief Joe Quesada disputed that reasoning, and instead hinted at a larger issue that involved “dirty laundry” he didn’t want to air.

Given how these revivals typically fare creatively, and how uninspiring the original comics were, it’s probably for the best.