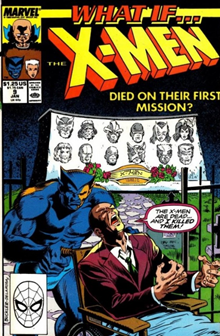 I bought the book that started my 30-year obsession with comics when I was 12 years old, but my fascination with superheroes and cartooning goes back much further.

By all accounts my first pop culture love was Sesame Street. Now before I get lost trying to trace Super Grover to Watchmen, I’ll instead say that it might actually have been Sesame Street’s sister show, the Electric Company – which stopped production of its initial run the year I was born, but lived on in reruns long enough for me to watch as a preschooler – that actually sparked the fire. The Electric Company not only featured the superhero Letterman, but also the ongoing “Spidey Super Stories” segment, introducing me to my favorite super-hero, Spider-Man. When I was around six years old, I would meet him in person at a toy store in Decatur, a high point of my young life. 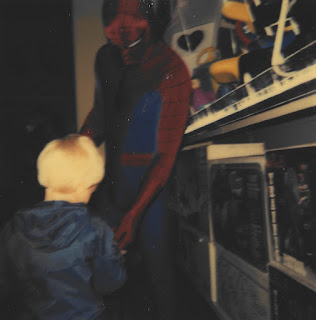 One of my most vivid and happy Christmas memories is of waking up to find the fireplace mantle in my grandparents’ house in Bowling Green, Kentucky lined Underoos: Boba Fett, Spider-Man, Batman, Superman, and Green Lantern. 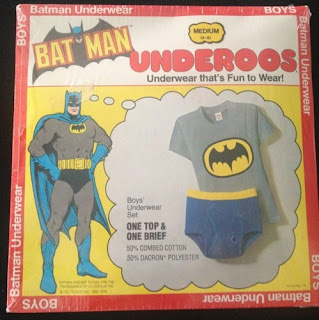 The debut of He-Man and the Masters of the Universe when I was in first grade blew my young mind. While not strictly superheroes, I mean, come on, they pretty much were. A bunch of muscled men and women in colorful costumes with an array of inventive powers battling one another? My favorite aspect of the Masters of the Universe were those costumes and character designs. Those are what really set my little imagination reeling. By second grade, circa 1983, I had created my own superhero alter-ego, Super Paul, who had a bulbous nose and his own legion of allies and enemies. These are sadly lost to time, but were likely mostly rip-offs of MoTU characters.

Superheroes lived on the periphery of my experience through early adolescence. I had a Mighty Marvel Super Heroes Fun Book from Fireside that I often perused, wondering who exactly all these costumed people were. But I was more into G.I. Joe, M.A.S.K., and Transformers than Marvel or DC. Part of that was an issue of exposure. The only superheroes on TV in the early 1980s were The Incredible Hulk and Spider-Man and His Amazing Friends, and while I was a faithful viewer of both of these programs, they weren’t enough to drive me to comic books. Neither were the Christopher Reeve Superman movies, all of which I watched repeatedly.

As I grew I developed a healthy interest in comics and cartooning, driven largely by old Peanuts paperbacks that belonged to my mom, Garfield and Heathcliff collections, and the twin powerhouses of Calvin and Hobbes and The Far Side. I decided I would like to be a cartoonist one day, and would most likely take over from Bill Waterson or Charles Schulz when they decided to retire. As I reached junior high, this morphed into an ambition to become the editor-in-chief of MAD Magazine.

In retrospect, my obsession with MAD probably walked me right into comics, since they were positioned next to each other on the magazine racks. But that summer after sixth grade provided the clearest antecedent: On June 23, 1989 the Tim Burton-directed, Michael Keaton-starring Batman movie premiered, and like a good portion of the country I was swept up in Batmania. I saw it at least three times in the theater. I ate the cereal, I collected the movie cards, I put the poster on my wall, I read the novelization, and I bought the toys. The 1960s Batman show began showing up in reruns again, and I went to the campus theater with my step-mom and dad to see the 1966 film on the big screen in rerelease.

It’s no surprise then, that I bought my first comic books that winter. But it wasn’t Batman comics that reeled me in. When I had to go grocery shopping with my mom at Jewel Osco on Oakland Avenue, it became my habit to beeline to the magazine display at the back of the store. One day circa November 1989 I started flipping through the comics and became fascinated with one called What If…?, a title I’d later learn reimagined pivotal moments in Marvel history. This particular issue - “What If the X-Men Died on their First Mission?” - examined an alternate reality in which the story told in Giant-Size X-men #1 (1975), the book that introduced Storm, Wolverine, Colossus, and others as X-Men and revived the franchise, instead ended in tragedy.

The writer of this issue, Roy Thomas, had a long history with the X-Men. He was actually the team’s second regular writer, taking over from Stan Lee with 1966’s #20 and guiding the characters for two years. After about a year away, in which Doom Patrol co-creator Arnold Drake wrote the book, Roy returned to the X-Men and saw the title through to issue #66 (1970), the final issue before the book went into reprints for five years. And he though his brief stint as Marvel’s editor-in-chief ended the year before Giant-Size X-Men’s publication, it’s likely he had a guiding hand in making it happen.

For this What If…? story Thomas basically took the events of Giant-Size X-Men and its immediate follow-ups, Uncanny X-Men 94 and 95, and reimagined them. In this new reality, all of the X-Men, old and new, perish in space. Only Professor X and the Beast (who at that time was an Avenger, not an X-Man), survive. But when Count Nefaria and his Ani-Men take over a nuclear missile base, Beast has no choice but to call together a new group of mutants to defeat the villain. The team he calls together is full of familiar characters who at that point hadn’t been X-Men before: Scarlet Witch, Quicksilver, Theresa Rourke Cassidy (Banshee’s daughter), Namorita (Namor’s cousin), Rahne Sinclair, and James Proudstar (brother of Thunderbird, who had the misfortune to die in Giant-Size X-Men #1 in both realities). They save the day and then band together as the new X-Men.

What’s interesting about this particular team is how it drew from history while presaging a few developments that had yet to occur. Rahne of course was the New Mutant Wolfsbane, though here recruited to Xavier’s school at a much younger age than she would be in the main reality. Theresa had debuted in a 1981 Spider-Woman story, and then had joined the X-Men orbit in the 1987 Fallen Angels mini-series. She would go on to join X-Force in the 1990s, and so would James Proudstar. In fact, the latter’s story in that book seems to be lifted directly from this issue of What If. The use of Namorita was also intriguing, considering that just a few months after the publication of this issue, she’d join a different team, the New Warriors.

Thomas ends the issue with a nice little joke that was funny at the time but became even funnier in the 1990s as the number X-Men-related books ballooned: “It seems there will always be ‘X-Men,’” the Watcher says, “And ‘X-Factor,’ and ‘New Mutants,’ and ‘Excalibur…’”

Of course at the time I bought this issue I didn’t quite get the joke, nor did I understand any of the history I just outlined above. In fact, I don’t even remember what it was that drew me to that particular comic book. Why did I choose to lay down my (or my mom’s) $1.25 for an alternate reality tale about characters I knew nothing of? Well, I believe the fact that it was all foreign and seemingly impenetrable was actually a draw. I wanted to know who all these characters were and how they fit together and what their histories were.

Rich Buckler’s cover was another draw. The emotion and drama of it still strikes me even now. I have a hard time believing, however, that his inside art set me on fire in any way. Buckler – an artist with a long list of credits at both DC and Marvel since the 1970s – has a style I’d call workmanlike, and I don’t mean that as an insult to his skills: His draftsmanship and layouts are solid, and place storytelling over all else. He worked very much the “house” Marvel style of the 1970s and 1980s, typified by John Buscema and How to Draw Comics the Marvel Way. It’s a style that was already somewhat antiquated by the late-‘80s and would become nearly extinct within a couple of years.

Now I’m still objective enough to know that What If… #9 was no comics masterpiece. Rereading it now, I realize there’s not a ton of nuance or depth to the story. But it strikes me that some of the elements I most value in comic book stories are present in this one, namely alternate realities, unlikely teams, new beginnings, and the power of legacies. So I can draw a direct line from this particular comic book to those proclivities. This book also made me a lifelong fan of Dr. Henry McCoy, the Beast (more on him right here and here). 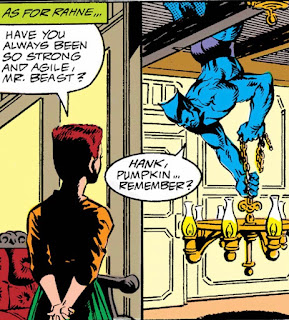 Most significantly, What If… #9 also made me want to read more comics.

When I look now at the list of comics that were released the following month (February 1990 cover dates) it’s clear that my dabbling quickly turned into a preoccupation. The covers of Avengers 314, Avengers Westcoast 44, Fantastic Four 337, New Mutants 86, Silver Surfer 34, and Web of Spider-Man 61 – featuring art by the likes of Paul Ryan, Walter Simonson, Ron Lim, Alex Saviuk, Rob Liefeld – are all burned inside my brain, and looking at them now fires the same neurons that fired when I was 12 years old.

Heroes for the '90s!: An Introduction 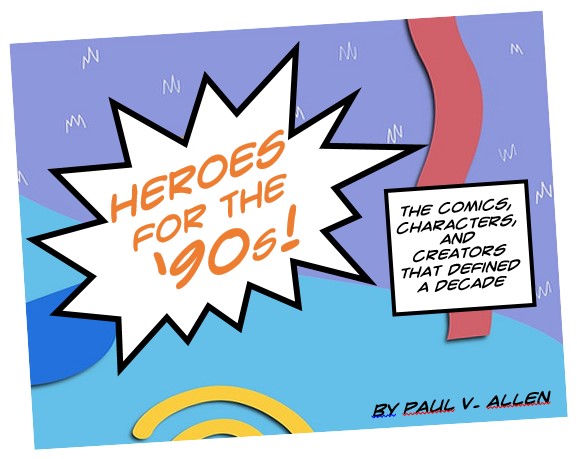