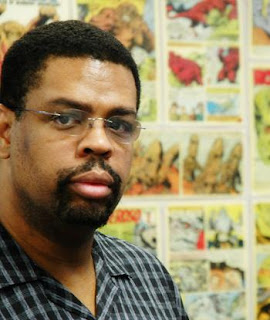 News came through this week that Dwayne McDuffie has been fired from his post as writer of Justice League of America. Make no mistake, it's bad news.

McDuffie, co-creator of Ben 10 and the Milestone line of comics, is a talented guy who obviously isn't getting the respect he deserves. Consider that he put together a very good run on Fantastic Four a couple of years ago with artist Paul Pelliter, and then was shuffled aside in favor of the hit-or-miss Mark Millar.

McDuffie says he was fired, believe it or not, because for the last two years he has given fans truthful answers to their questions about the behind the scenes decisions that go into a high-profile book like Justice League of America. Maybe the higher-ups at DC wouldn't have minded if they had made good decisions. Instead, after letting novelist Brad Metzler set the table, DC plagued McDuffie's run with editorial mandates out the wazoo, forcing him to use the flagship title as a set-up man for other stories and events in the DC universe.

Witness: McDuffie's relatively short run kicked off with something called "Justice League of America Wedding Special" meant to piggyback off the "event" of Green Arrow and Black Canary's wedding. To McDuffie's credit, he didn't play into the hype, instead using the special to introduce a four part Injustice League / League of Doom story (with nary a wedding in sight).

After that, McDuffie was forced to introduce the latest Tangent miniseries (issue #16), and then saw the title handed over to Alan Burnett for 3 issues (as a tie-in to the miserable miniseries Salvation Run); McDuffie had back up stories in 2 of the issues. After a nice Flash-centric one off (issue #20), McDuffie wrote an (admittedly good) Final Crisis lead-in issue before being left alone to tell a decent four-parter centering on Red Tornado, Amazo, and Vixen.

Then - get this - he was given the green light to introduce his Milestone creations to the DC universe, and after two parts of the story, the story's momentum is killed by a superfluous Faces of Evil tie-in issue written by Len Wein (issue #29). Even more egregious is the fact that Chriscross (who first made his name on Milestone's excellent Blood Syndicate title) drew this throwaway issue, when he could have drawing the main book that featured Milestone characters! Would that have made too much sense? With issue #30, McDuffie was back to the Milestone / Shadow Thief / Starbreaker story that closed out his run.

By the time of these last four issues, there was a sense that the sky was clearing. The team had been reset. Final Crisis took out Martian Manhunter, Batman, and Hawkgirl. A new (ill-conceived, in my opinion) Titans book grabbed Red Arrow and Flash. Black Lightning and Geo-Force were called back from whence they came (the Outsiders). Superman was sent away by the New Krypton storyline and Hal Jordan (Green Lantern) left to start his own Justice League (in the truly awful Cry For Justice limited series). So McDuffie was using a line-up comprised of Vixen, John Stewart, Dr. Light, Firestorm, and Zatanna (with hints in the "Origins & Omens" back up in #30 that Icon would join the team). If you're scoring at home that's a Justice League line-up that's 83% people of color and 50% female, which is pretty damn awesome. Unfortunately, we never got to see that come to full fruition.

It's worth mentioning, as well, that McDuffie was also saddled with a rotating cast of artists, never getting into a good creative flow even when he was allowed to tell his own stories. He worked with 14 different artists on the 20 issues he wrote (the best, in my opionion, being Mike McZone, Carlos Pacheco, Ethan Van Sciver, and Rags Morales). All this is to say that McDuffie had legitimate complaints here, and one can hardly blame him for feeling / venting frustration. 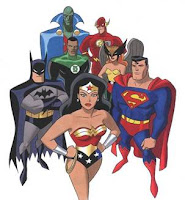 One could argue that a good writer should be able to make good stories out of whatever cards he or she is dealt, and for the most part McDuffie did that. Despite all the discontinuity of his run, the title was never worse than good. But, knowing McDuffie's excellent work on the uncompromising Justice League Unlimited animated series, it could have been so much better. His firing is not a referendum on his writing, but on DC's editorial leadership and head honcho Dan Didio's "throw a bunch of crap at the wall and see doesn't run" style. It's also a sad commentary on the state of current comics creation, where freedom and autonomy are the black sheep of the creative process. There's an oxymoron if I've ever heard one.

Dwayne McDuffie deserved better, and so did we readers.

I don't get that excited about comic book movies anymore, because it's just so hard to get them right. But if this was the actual trailer for the upcoming Green Lantern movie, I'd be in line already.

If nothing else this makes the case that Nathan Fillion would be a perfect Hal Jordan. In reality, they probably won't cast him because of his age. They'll want someone young enough to reprise the role over the next 10 years in potential sequels and a Justice League movie, and its potential sequels. This mindset has overtaken comic movie planning and, I think it's a misguided approach. All that energy should go into making the first film as good as possible, instead of taking success for granted.

Also, the guy who made this, Jaron Pitts, should get a job working on the actual film, or at least a chance to make the real trailer.
Posted by Paul V. Allen at 2:40 PM No comments: 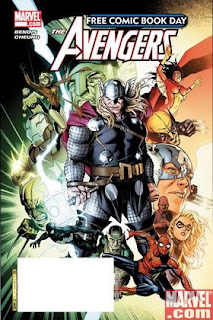 But since returning to comics reading in the last few years, the love just hasn't been there. I still follow a couple of Marvel books and enjoy reading older issues, but overall, I don't like the current direction of the line.

The recent Avengers Free Comic Book Day offering is a perfect example of why.

Nor will I complain about the art. Jim Chueng is a great draftsman (his work looks like Chris Bachalo and Oliver Coipel genetically spliced together) and a pretty good storyteller.

The problem lies with the script by Marvel it-writer Brian Michael Bendis. The basic story is good enough: The Avengers face a pissed-off Norse ice giant called Ymir who has just taken out Thor. The problem is in the execution.

Spider-Man narrates, which is all fine and dandy if you're behind the idea that Spider-Man should be a full-time Avenger. I'm not. I always liked the idea of him being a reserve called in for extra special occasions. It makes more sense with Peter Parker's lifestyle, too. I'm even more against Wolverine being an Avenger. It's not strictly because I dislike the character (which I do a little bit), but more because he's already ON THE X-MEN! It's a stretch to me that he would even be on one team, let alone two.

That aside, this is an interesting Avengers line up. With Ms.Marvel, Luke Cage, Iron Fist, Spider-Woman, Hawkeye (now Ronin) and Mockingbird, it's like a dream team circa 1977. Captain America (Bucky Barnes in shiny armor) rounds out the group.

But in actuality we only get four pages of the Avengers (some of them don't speak more than two words the whole issue) before a whole other team of Avengers shows up. It's the Dark Avengers, led by Harry Osborn, formerly the Green Goblin, currently the Iron Patriot. Having helped beat back the Skrull invasion, he is currently a hero in the public eye. Of course we all know he's bat-sh*t crazy. He has brought along his own team of analogue heroes who are actually villains going by the names of heroes. Confusing, yes, and Spider-Man even acknowledges this. Of this group, Ares emerges as the focus of the issue, while everyone else is relegated to background noise.

Ares aside, it seems like the inclusion of the Dark Avengers was unnecessary and took space away that could have been spent telling us more about the Avengers themselves, their powers, their personalities, etc. Look, I'm not one of those people who thinks every issue of a comic needs to be contain a primer for a new reader. I believe the average fan is savvy enough to pick up what they can and fill in the backstory as needed. But seeing that this was a Free Comic Book Day book, and it was a good opportunity for Marvel to try to lure me back into the fold, it's just a wasted opportunity.

There's also the matter of Bendis' trademark wordy dialogue. Comic dialogue has never been an especially subtle or realistic thing, and I'm all for elevating the art form, but this isn't how I'd go about it. Basicaly, everyone on the team cops the same sarcastic hipster voice. It works for Spider-Man, 'cause that's who he is, but does the whole team need to speak this way? It's like watching Dawson's Creek, or a Kevin Smith movie, where every character speaks in the voice of the writer. Witness the first exhange of dialogue between the Avengers:

Luke Cage: Damn.
Mockingbird: Well put.
Luke Cage: I am a wordsmith.
Captain America: What is that?
Ronin: You know what...I actually know what that is. It's a Norse ice giant.
Iron Fist: Great, okay, just tell us how your beat it the first time and we'll --
Ronin: Well, uh, a big giant fire god came and they beat each other out of this dimension.
Luke Cage: Do you know any fire gods?
Ronin: I do not.
Luke Cage: So nothing you said helps us at all.

Blech. There are "cute" exchanges like that all over the place. I'm all for a little levity, but it just doesn't work for me. And it doesn't seem to fit with the tone Bendis is trying to set in his stories. Anyway, superhero comedy has already been done. It was called Justice League, by Keith Giffen, J.M.DeMatteis, and Kevin Maguire.

The story wraps up with some mumbo jumbo about a "twilight sword" and an never-acutually-gets-going throwdown between the two Avengers teams. Like I said, promising premise, disappointing execution. Besides the art, the only thing I truly enjoyed was Thor's badassitude at the end. "You and I shall have words another day," he tells Osborn and it brings to mind the beat-down he gave Iron Man in issue 4 of his most recent series. I might be on board for a repeat of that.

But am I going to buy any new Avengers comics? Or anything that Bendis is in charge of? Not based on this issue. Marvel, keep trying. You'll get me back one day.
Posted by Paul V. Allen at 2:40 PM No comments: