Welcome to a new ongoing feature on 24 Pages. The idea is simple: I read a comic book and tell you about it. The inspiration for the idea isn't as easily summarized.

Last fall my wife and I were on a weekend vacation to Two Harbors, Minnesota. In the hotel room, we came across an episode of the AMC TV show Mad Men. We had heard many good things about it, but both thought it would be ideal to get the first season on DVD and catch up on the second. However, there in the hotel room we made a daredevil decision: We would watch the episode despite a lack of knowledge of the characters or what had come before.

After watching (and enjoying) the episode, we talked about how it wasn't that long ago that if you wanted to watch a show, you just watched. You didn't worry about not having seen earlier episodes. If you missed an episode you just had to hope they'd repeat it soon. There was no DVR or DVD or Internet.

I bring this up because it kind of reminds me of being a comic book reader. Too often I fall into the mindset of feeling that I have to read everything in order from the beginning. Often reading large runs of issue in order is a satisfying experience, but sometimes it feels like more of a chore.

That gets me thinking about my when I first started collecting comics. I didn't know anything about companies, creators, or even the characters. My only access to comic books was the spinning racks in the local Jewel and Kroger grocery stores, or the drug store next to the place my mom got her hair done. I was limited to what was available and what caught my eye. I didn't worry if the issue I bought was part of a multi-issue story arc. If it was, I just tried to figure out what was going on.

Of course that's the first stage of the collecting bug. We all know the next step is to discover that there are shops that sell old issues, to start trying to put together consecutive runs. That's part of the fun of being a comic fan, but when it comes to actually reading the issues, sometimes I miss just picking a random issue up and enjoying it for what it is.

Thus, this feature. My initial idea was to write about every single issue of Fantastic Four, out of order, but I realized it might get kind of tedious. Instead, I'll keep true to the concept and write about whatever issues I happen across. 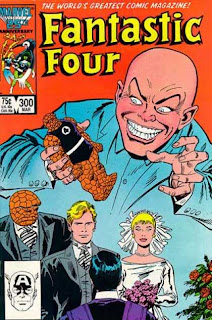 Fantastic Four #300 has a cover date of March 1987. Unlike many milestone issue numbers (usually in intervals of 25 or 50) there's no extra pages or special cover or retrospective or self-congratulation or even any real acknowledgment of the significance. It's kind of refreshing until one realizes that, the title had already used up all of its anniversary tricks on issue #296.

Another interesting item of note is the fact that the cover notes Marvel's "25th Anniversary" in the upper left hand corner. This makes sense, if you count Marvel's beginnings as the 1961 debut of this very comic. Fast forward to 2009, and Marvel's covers are bragging about "70 Years of Marvel Comics." No, your math isn't wrong. It hasn't been 45 years since 1987. I believe, in order to respectfully compete with DC's 75 years, Marvel has started counting the 1939 debut of Marvel Comics (featuring Namor, the Sub-Mariner) as their starting point, even though the original 1961 date makes more sense.

This issue was written by the venerable Roger Stern. He only wrote (or co-wrote) 8 issues of the title before giving way to Steve Englehart's run. John Buscema drew the issue with inks from his brother Sal. Both of them had runs on the titles in the '70s.

Even though there's no acknowledgement of the 300 milestone, the issue still features a big event in the lives of the F4. As you can see on the cover, this is the one where Johnny Storm (the Human Torch) marries Alicia Masters. Alicia was a blind sculptress who had previously been involved with Ben Grimm (the Thing). Johnny and Alicia got together during John Byrne's run (which had just ended with issue #293) so this is a continuation. The two eventually broke up during Tom DeFalco and Paul Ryan's time on the title when it was revealed that Alica had really been replaced by a shape-shifting Skrull imposter named Lyja.

Anyway, this being a comic book it isn't just a straight-ahead wedding. See Alicia's step-father is the villain called the Puppet Master (he's the eye-lift surgery recipient on the cover) and he's not happy about her marrying Johnny. So he allies with the b-listers Thinker and the Wizard to ruin the wedding. But once you think you know how the story is going to zig, it zags.

Plus, Ben and Alicia have a sweet peace-making conversation, and archnemesis Dr.Doom acknowledges the wedding in his own in idisynchratic way.

What Did You Think?

I thoroughly enjoyed this issue. It has the feel of an event issue with out the hullabaloo.

It's also the solid performance you'd expect from the creators involved. The writing has some great moments and pacing and never tries to overstep its bounds. Same thing for the art. It's nothing outstanding, but it's well-drafted and always in service of the story.
Posted by Paul V. Allen at 3:49 PM No comments: