I've decided that drastically dialing back my comic book buying habits will greatly benefit my love of comics. Here's why: 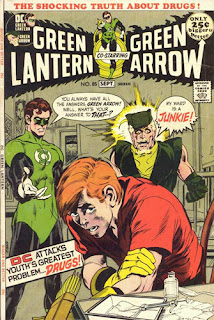 I've been thinking a lot lately about comic collecting as an addiction. With an addiction, you need a constant new supply, you spend a lot of money, energy, and time angling to get that supply, and you get cranky and out-of-sorts when you can't get it. An addiction to something that doesn't destroy your physical health or ruin your interpersonal relationships doesn't have to be a bad thing, but it does have to be called what it is.

Like drug dealers or tobacco companies, comic companies have become very reliant on their customers' addictions. They count on buyers need for a weekly fix of new comics. They rely on the loyalty of fans who have been following their favorite characters for 30 or 40 years. They bank on the small, strong community of their customers, and the peer pressure that comes along with that, i.e. "You've got to read the newest issue of Invincible! You won't believe what happened to Atom Eve!" The Internet, especially, has helped the comics companies along on this last one. SPOILERS!

Most of all, comic companies ask on their customers to abandon monetary logic. A couple of years back, I wrote about how collecting individual issues of comics doesn't make much sense, though I didn't really take my own advice. That has become even more true with Marvel's pioneering of the "more money for less pages" initiative that finds us paying $3.99 for 20 pages (of course it tends to be the best-selling books they're doing this on). Why in hell would I pay a total of $24 for a six issue story in floppies when I can get the whole thing in a hardcover collection for a discounted price of $16 on Amazon.com? Well, for the reasons mentioned above: My weekly fix; My need to keep up with the story and to avoid spoilers (most collections don't come out until 6 months after the first issue collected); My need to keep my collection intact.

I'm not done with this train of thought yet, but I want run it backwards a little bit before I come back.

I started reading comics in 1989. For the next 6 years they were what I lived and breathed. When I went away to college, interests (girls and music, namely) split my attention, I stayed with comics, mostly thanks to my amazing mom, who made a weekly trip to the local comic shop, picked up my subscription for the week, and mailed them to me at school. Often, especially in my homesick freshman year, those envelopes of comics were buoys in the middle of the ocean. They kept me afloat.

After I graduated college and moved out on my own, it wasn't long before I quit collecting comics. I don't really remember a specific reason why. I guess I wasn't super-excited about anything I was reading at the time. There was little joy in the weekly trip to the closest shop in my new city (it didn't help that the staff weren't friendly at all), money was tight, and I didn't have room in my small apartment for boxes and boxes of comics.

My love of comics went dormant, but it didn't truly go away. When I'd go back to my mom and step-dad's house for visits, I always devoted some time to getting lost in my vast collection that was housed in their basement. Eventually, I started taking comics back with me, bits at a time. I'd read them here and there, and stop in the comic shop once in awhile just to see what was going on. Four more years passed this way.

I didn't start collecting again right away. It was gradual. First I decided to finish up the stories I had abandoned halfway through, Bone and Cerebus mainly. Then I looked to fill in runs I'd loved, namely Byrne's Fantastic Four tenure. Those missions completed, I found myself wanting more.

Before long, I was back in the game, with a pull list at the local comic shop and a weekly trip on top of sporadic expeditions to search out things I'd missed during my lapsed collecting years. Catching up with five years of continuity-heavy superhero stories sounds daunting, but it was actually a blast. I had some advantages in my favor. For one, I could find runs or trades of recent comics at drastically reduced prices (Half Price Books, I can't thank you enough for your comics sections; eBay, Atomic Avenue, and Lone Star Comics, I love you), and for another, the benefit of hindsight allowed me to see what from those last 5 years had actually been worth reading.

I've realized gradually over the last couple of years that getting caught back up in the weekly comic-buying addiction ran in exact opposition to those benefits I so enjoyed after returning from exile. Buying comics individually on a weekly basis is expensive. And buying things the day they come out removes the benefit of backwards perspective. An example chosen from way too many: DC's recent Flashpoint. I love the Flash. I love the DC universe of characters. I love alternate reality stories. I've loved much of Geoff Johns' past work. I wanted to know what massive changes this story was going to bring to DC continuity. You can't fault my logic for thinking I'd like this mini-series. BUT, it kinda sucked. I didn't know that until I'd bought and read all 5 issues at $3.99 a pop. Bye bye $20. If I'd had the patience to wait it out, I could have avoided that dud.

This is why I've decided to dial it back and kick the addiction. I'm not going cold turkey though. I made a list of the comics I was buying every month, then I divided it into three sub-lists: Floppies, Trades, Gone. The individual issues I'm going to stick with are titles that I've collected that way for many years, namely Green Lantern, Flash, and Fantastic Four. The trades list includes titles that I was never buying individually (Invincible, Fables, Unwritten) and titles that I know will be worth waiting for (Batwoman). The final sub-list consists of titles that I realized I didn't care all that much about. If I don't want a paperback of a story sitting on my shelf, why do I want the individual issues in the first place?

The result is a dramatically lighter weekly haul and a noticeably heavier wallet. Sounds great, right? I hope it is.

In making this decision, my biggest obstacle was fear. Fear of missing out on stories I might love (or comics that become scarce right after release and might never be reprinted), fear of my love for my hobby diminishing, fear of ruining the comics industry. That last one sounds ridiculous, I know, but this is how comics fans think. The industry is ours. We need to keep it going. There's such a small number of us (even the very best-selling comics often barely make it to 100,000 shipped) that if even one person stops buying weekly titles and starts waiting for the trades, it takes money away from the creators and companies, and increases the likelihood of our favorite characters disappearing from our lives (at least in comics form). Waiting for the trade could mean the trade never comes. 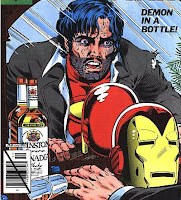 Comic shop owner Brian Hibbs, who writes for Comic Book Resources, said as much in a recent column. He's not wrong, but he does have a horse in this race. If I wait for the trade, the least I could do is buy that trade from my local comic ship, right? Many comic fans are akin to those people who support local businesses. I could get my groceries cheaper at Walmart, but I'll pay more at my local co-op for the good of my community. Comics fans do this both in a larger comics industry sense and in a small local comic book shop sense. I see that mindset, and I feel a bit guilty, but, damn, Amazon.com and Half Price Books have good prices on things. I have a mortgage, car payment, school loans, and a toddler to feed.

And lets face it: Comics are never going to disappear. They might morph into something we don't currently recognize, but they'll be around. And 70 plus years of back issues and trades are going to be out there, often at discount prices. If they did stop making new comics today, I'd have enough older stuff to read or re-read well into old age. That's where comics are an addiction you can really love. When you recover from drug or alcohol addiction, you have to abstain forever. When you recover from a comic book addiction, you can still read them, and maybe enjoy them more than you ever did before.
Posted by Paul V. Allen at 2:30 PM No comments: