Living in the Bottle City


I monitor the comics news sites (Comic Book Resources, Bleeding Cool, Newsarama, The Beat) pretty closely. I've been alarmed lately at how often and how quickly any conversation can turn to the death of the mainstream comics industry. There's a palpable feeling among many comics fans that the hobby they love is in the final stages of a long-suffered illness. Honestly, it's pretty easy to fall into this mindset. There are seemingly signs of doom everywhere. But I've decided that those signs are misleading. Here's why:

No doubt we're living in wildly transitional times. A small handful of years ago no one knew what a smart phone or a tablet or an e-reader or streaming or an MP3 was, and now they're all greatly affecting the way we purchase and consume our entertainment. The music, film, and television industries have all had their digital growing pains, but have come out the other side with a workable, profitable model. Even books, those long-assumed-antiquated artifacts, have stuck around, albeit on the Kindle and Nook and iPad rather than paper.

Though the writing about digital has been on the wall long enough for the spray paint to dry and even fade a little bit, the comics industry is just now starting to focus on offering their product electronically. Comics being a subsection of just regular old books, and books having made the transition mostly successfully, you'd think this would be a pretty smooth ride. DC have started offering all of their books digitally the same day as they're available in print. Marvel is putting "free" digital codes in all of their books, and trying to test the boundaries of the digital medium with the forthcoming Infinite Comics.

The thing is, you'd be hard-pressed to find anyone sensible who thinks digital comics will help the industry rebound to the dizzy heights it once occupied, when DC sold millions of Superman comics to eager young lads and lasses. Unlike music, movies, television, and even novels, comic books are not simply a popular, proven entertainment option needing a new delivery method. Comic books are a niche hobby, and have been since at least the mid '90s.

Think about this: The best-selling comic book each month hits just over 100,000 sales, at best. Most hover somewhere around 50,000. A comic is typically in danger of being canceled if it sells less than 20,000. A network TV show, on the other hand, gets threatened with cancellation when it gets less than 7 million viewers. I know they're different mediums, but, really, the comic book industry can't go on pretending it exists in anything but its own hermetic Bottle City of Kandor. 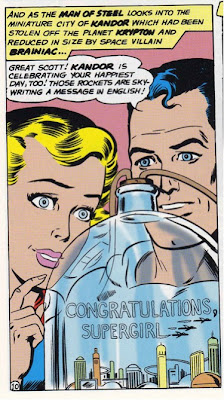 Oh, sure, it's easy to get fooled, what with comics enjoying what has to be the highest amount of mainstream exposure they've ever had. The Walking Dead (based on an Image comic book) is a bonafide hit on AMC. This summer, everybody who didn't already know is going to know who the Avengers are. Anticipation for Christopher Nolan's final Batman film is crazy-high. There are currently Avengers, Spider-Man, Young Justice, and Green Lantern cartoons on the air. And you can walk into any Wal-Mart, K-Mart, Target, JC Penney, or Kohl's and buy any number of shirts, hoodies, pajamas, hats, or underwear featuring Marvel and DC properties.

But none of this means actually means that reading the comics themselves has gotten or will get more popular. It just means Hollywood studios and New York marketing firms have recognized their value as idea factories, as imaginative and / or nostalgic concepts to translate to other media. Reading comics will remain obscure, no matter how much we see the characters and concepts in the world around us.

The thing is, the comic industry's shrunken status is not the victim of an evil villain's plot. Mainstream comics did this to itself, both creatively and financially. They sealed themselves off and away, made their product more obscure and difficult to obtain, made their stories more impenetrable.

First, the direct market took over completely. Used to be you could find comics at grocery, convenience, and drug stores on those delightful spinner racks. While your mom shopped - which took forever - you could file through the latest offerings from Marvel and DC. Now, comics are found exclusively at comic book stores and (some) bookstores. I love comic book stores; I've spent many a pleasant hour in them. But they don't expand the hobby to new people.

And let's say that hadn't happened. Let's say comics were still available in places that kids and teenagers actually hang out. When I started collecting they were $1.00 each, so if I didn't have pocket money, I could talk my mom into at least 2 or 3 (actually my mom is awesome; she'd usually offer before I even asked). Now, a new comic is either $2.99 or $3.99. I think the first mom reaction would be "Wait that must be the Canadian price" and then she'd say "Only one" or "No". The line of thinking, I suppose, is that kids now "hang out" online, so that's where they'll find their comics. But first they have to have some impetus to seek them out, and then money becomes a sticking point again. Most publishers are keeping their digital prices in line with their print prices, and $2.99 or $3.99 is still too much for a kid to drop on a single comic.

In short, comics are way too expensive. And I won't even get into the "bang for your buck" factor of looking at completeness of story or page count or comparison to other media. Those are all just details. Comics are too expensive. You have to have a lot of disposable income and an existing desire to read these things to become a habitual reader. Trade paperback collections have made it cheaper and easier, but you have to be willing to wait.

Speaking of waiting, god forbid you want to take a shot at reading a comic you've heard good things about, only to find you've arrived at the store 5 hours too late to get a copy because the store didn't anticipate demand. Nothing builds an audience like your product not actually being available. At least digital can solve that problem, if a person is so inclined.

In terms of storytelling, I'll let retailer Brian Hibbs (who writes for Comic Book Resources) handle this one: "...the core-est of our 'core product' -- that is, specifically, the serialization of ongoing stories set in superhero universes of Marvel and DC -- really are a niche product. It isn't that new readers can't jump in to those worlds and product streams, but it seems to me that the very nature of the Soap Opera style of our dominant genre would mitigate against significant numbers of truly new readers 'jumping on' to serialization in the first place."

So, yeah, comics aren't written with new readers in mind (not even the DC's "New 52"; those stories still rely on a pretty deep familiarity with the characters and the way their fictional world operates). However, unlike my first point, I don't think this is something that should change. Comics and television are the only two medium that can provide years-long narratives to their audiences. It takes a certain kind of mindset to be willing to wade into the bracing waters of superhero backstory. You're going to be confused at first, and you're going to have to do a lot of research to catch up. Nearly every comic reader did it though, and is happy they did.

That's not to say comics shouldn't expand their reach and ambition. We need self-contained stories like Bone, The Walking Dead, Watchmen, Persepolis, American Born Chinese, and Y the Last Man, and continuity-heavy non-superhero fare like The Unwritten and Fables. We need creators to keep pushing those boundaries of what comic storytelling is, and we need comics that appeal to people for whom superheroes are anathema.


By most accounts, recent sales of comics have been pretty good by comics standards. In no way as good as they were in the early '90s, or even the early '00s, but pretty good. Nothing is dying just yet. Sure, DC just threw the baby out with the bathwater with the "New 52", and Marvel is banking on a video game concept to be their big summer hit (Avengers vs. X-Men). Neither of these is especially appealing to me, so I can't really blame those who feel we've reached the end times. At the same time, I can't help but feel that when people are seeing "signs" of the industry dying, they're just suddenly noticing these glass walls we've had placed around us in our bottle city.

We're not dying here, but we do need someone to come along with an expander ray pre-programmed with the following settings: a) more available, b) more affordable, and c) more diverse (but still unique).

Thus ends the final in a three part trilogy in which I (somewhat negatively) document my changing attitudes toward the modern state of mainstream comic books. This is all for now, I promise.