In Review: Was Superman a Spy? 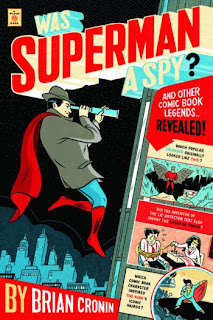 For several years, the indefatigable Brian Cronin has been addressing comic book urban legends on his Comics Should Be Good blog. He has written over 200 entries, each one tackling 3 legends. That means he's researched and proved or disproved over 500 stories from comic book history. They're required reading for serious comic fan.

Now, Cronin has released Was Superman a Spy?, a collection of legends previously-covered and newly-revealed. Some minor quibbles aside, it's just as essential.

There are a couple of jarring things about the book for those who've followed Brian's work on the blog. For one, the book is not structured the same. The blog poses each legend as a question and then attempts to give a definitive true or false. It's a very effective structure. The book abandons this approach and tells the legends in a sequential, narrative form. This results in what feels almost like "the secret history of comic books."

However, the book is more organized than the blog (which, despite occasional theme weeks, is haphazard in subject matter). In the book, the "chapters" are arranged by company and character, making it very user-friendly. It's too bad these two approaches couldn't have been combined, with the "true or false" structure organized by company and character.

My only other complaint is Cronin's writing voice. For the most part, Cronin comes off as a believable authority, which is important for an informative book of facts such as this. However, there are places where he still sounds more like a fan (which he is at heart - aren't we all?). For example, in summarizing a legend about Martin Landau's brief career as a comic book artist, Cronin writes: "It's probably for the best, because if comic books gained Landau, the world of acting would have lost him, and he is far too good of an actor to lose." There are several moments like this peppered throughout the book, where Cronin's opinion intrudes, and feels out of place.

There are also a couple of places where Cronin's logic doesn't quite follow, like when he writes about Marv Wolfman's original intent to introduce a black Teen Titan called Jericho. Carmine Infantino, then publisher of DC, rejected the story as written. Much later, Wolfman did introduce Jericho into the Titans, but as a curly, blond-headed white guy. Cronin calls this a "measure of revenge". Wait, what? If the offense was not allowing a black character to be introduced, wouldn't the revenge be Wolfman's creation of Cyborg, a black Titan who became quite popular with fans?

Even so, Was Superman a Spy? does a lot to recommend itself. The book is generously illustrated with original covers, interior art, and photos. Many of the legends require (or are at least enhanced by) visual reference, so I'm glad the publisher ponied up for the rights to reprint these images. And Cronin is a great historian and researcher; he has uncovered some wonderful anecdotes. My favorites include the story of Ray Bradbury's clever response to EC Comics' unauthorized adaptation of two of his short stories, and Disney duck artist Carl Barks' insistence on the scientific accuracy of his stories leading to the discovery of a process to raise sunken ships and a previously-unknown chemical compound!

Those of us who love comic books have long been required to learn our historical information piecemeal and through unreliable sources. Brian Cronin has done some wonderful work in Was Superman a Spy? by cutting through the fiction in a medium where the stories that get printed often aren't the only works of fantasy.
Posted by Paul V. Allen at 2:40 AM No comments: