For Love or Money?: Thoughts on Before Watchmen

First, some news:
Okay, breathe.  None of these are actually happening.

Your reaction to these news bits might have been roughly equivalent to the news that, after 26 years, DC are going to publish new stories about the characters from Alan Moore and Dave Gibbons' classic Watchmen. The new comics will arrive as a series of mini-series under the banner Before Watchmen.

As in my fake news examples, high quality talent is involved, but somehow that doesn't ease the blow of an acknowledged, put-to-rest classic getting an addendum, does it?

Watchmen is a landmark in comic book storytelling. Historically, it showed that you could tell a big, serious story about people in tights. It set a new standard in comics for complexity in pacing, structure, and ambition. It was unique in that it told a finite story. It had a beginning, a middle, and an end (of course, it alluded and flashed back to the characters' histories when it was germane to the larger story). Today, it's one of the rare (if not the only) superhero books you can give to a non comic book reader and still have a reasonable chance that they'll not hate it.

Now let's get this out of the way: The existence of a prequel or sequel to a film / movie / comic does not diminish the original work, especially if you choose to ignore that prequel or sequel. Even if you don't manage to avoid the new work, the human brain is savvy and self-protective enough to erase most bad associations. 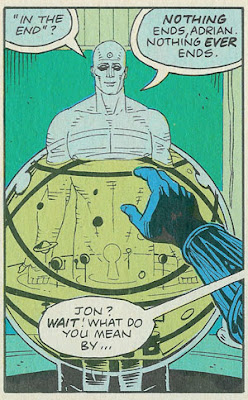 So we could conclude that if the idea of Before Watchmen offends you there's a simple solution: Ignore it. But that elegant approach is rarely sufficient, especially when it comes to comic controversies. You've got to be able to justify yourself, lest you be labeled as a fun-hating wet blanket.

The reaction to this has been far-ranging, from pure fanboy excitement to impure fanboy rage. Some feel that the artistic talent on the project (Darwyn Cooke, J.G. Jones, Adam Hughes, Joe Kubert, to name a few) is too good to pass up. Others have honestly been clamoring for more from these characters. Some are morally outraged that this goes against Alan Moore's wishes (Dave Gibbons gave a terse, unenthusiastic statement of approval). Others feel it turns Watchmen into a superhero franchise, which belies the whole point of the original work. And there are those who believe strongly that the original 12 issues told you everything you need to know about that universe, and that doing prequels is just mindless, lowest-common-denominator extrapolation.

These are all points that could be and have been argued. Neither blind optimism nor righteous anger seems to be the best reaction though, especially since no one reacting has, you know, actually read the books yet.

Here's what I think: Before Watchmen is a monetarily-blessed, creatively-doomed proposition.

With Watchmen, DC have been sitting on a goldmine, and it's frankly surprising they waited this long to cash in. Despite anything anyone at DC corporate says, this is all about money. It's not about "bold creative moves" as co-publisher Jim Lee recently remarked. It's about making dough, something that DC is full well in its rights to do. In fact, as a company owned by Time Warner, that's what its in existence to do.


And indeed, even among all the arguments, the one thing that everyone seems to agree upon is that DC are going to make a lot of money off of Before Watchmen (this might lead one to conclude that - since the comic-buying community is small - that a good portion of the complainers are going to buy the books out of some self-hating compulsion, but I digress).

There's also no one who believes that the prequels will surpass, or even equal, the quality of the original Watchmen. This places the project on creatively shaky ground. It immediately casts the writers and artists in doing-it-purely-for-the-money roles. Now I doubt that most (if any) of these writers and artists are consciously coming from that place, but that's where logic leads. If you are working on something you know can't be as creatively original or challenging as the original, and something for which the best possible reaction is "It was good enough", why are you doing it?

Comic fans want to believe that the industry they love is created and perpetuated out of a magnanimous zeal for creativity and art and storytelling and myth-making. And often we're able to convince ourselves of that, because so many comic creators are genuinely coming from that place even when their employers are not. Ideally, we'd like our art and commerce to be serendipitous partners, i.e. "I'm doing this out of pure creativity, and it's making a lot of money for my corporate overlords, too!" I believe Before Watchmen has stirred up such strong emotions because it's so egregiously not coming from that place. It's taken something that was the essence of creativity and turned it into a calculated, corporate-driven moneymaker, that, oh by the way, is not approved by its original creator. 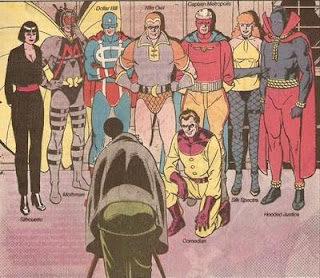 The only one of the mini-series whose existence I could possibly justify is Darwyn Cooke's Minutemen. It helps that I adore Cooke's superhero work (especially DC: The New Frontier), but the kicker for me is that the only revisit to Watchmen story that Alan Moore ever considered (albeit in better times) was a series about the Minutemen.

But, ultimately, I'll probably wait until the hardcover comes out and I can buy it used, so no money goes directly to DC. The main reason that I can't bring myself to support DC's efforts is this: The only way to honor the spirit of Watchmen would have been with the creation of something new, innovative, and daring in the superhero realm. Before Watchmen is going to be a lot of things, but we know it won't be that. And by flaunting that so shamelessly, DC is not only saying something to us about how they feel about comics, but how they feel about us readers, as well. I refuse to be a part of that.
Posted by Paul V. Allen at 2:04 PM No comments: