"The ghost of recent misery
Still has a song to sing
Your captivated heart
Waiting for a spark
No one you'd care to recognize
Suddenly in control
Unfortunate to find
What it is inside"
- Jimmy Eat World, "Criminal Energy" (2020)

What happens when life not only imitates art, but takes it further than the art possibly could? We're finding out right now in the United States, where we have a president so drunk on power and short on empathy that that his words seem perfectly natural coming from the fascist Nazi bad guy the Red Skull. So natural, in fact that the person who created President Supervillain on Twitter has to accompany each post with a disclaimer stating that these are not just panels from old Captain America comics, but the president's actual words. 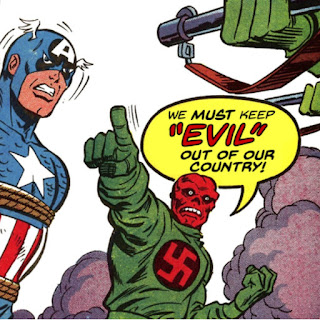 No comic book writer could create an antagonist as narcissistic, ridiculous, and malevolently ignorant as the one that currently darkens the White House. And so the past three years haven't seen the comics flooded with villains serving as thin analogues of the current president. In fact, one might say that superhero comics had long since moved on from the narcissistic, one-dimensional, fake-tough-guy, schoolyard-bully-writ-large, bellowing-man-child supervillain archetype long before the election of 2016 rolled around. Bad guys such as the Joker, Bane, Lex Luthor, Captain Cold, Doctor Octopus, Doctor Doom, Thanos, and Venom all become characters with complex motivations and worldviews, nearly every one at some point serving as heroes.

This could easily spin off into a discussion of the introduction of moral gray areas into superhero comics, but the real point here is that with the current president in office, comics are now more representative of reality than reality is.

Superhero comics have been commenting on social and political realities for pretty much their entire existence. Jack Kirby and Joe Simon had Captain America punch Hitler in the face in the early 1940s. Superman's exhortation against intolerance from 1949 has made the rounds on social media. There's of course Denny O'Neil and Neal Adams' groundbreaking Green Lantern/Green Arrow of the 1970s that took on drug addiction, war, and racism. Watchmen can be read as a cold war fable. The Dark Knight Returns has a lot to say about the news media and the responsibilities of power. The mutants of the X-Men have often served as a comment on bigotry and intolerance. 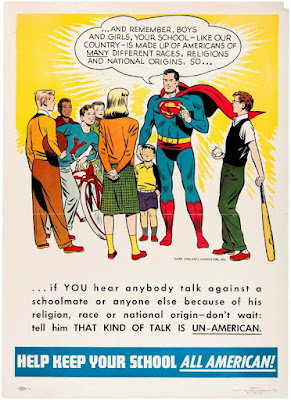 The idea of people with power using that power to do what's right, often at great personal sacrifice, is baked into the very core of the superhero. In their ideal form, superhero comics should absolutely take stances on issues of right and wrong as those concepts pertain to the times in in which they're created.

Just in the last month, I've noticed three separate series that have done just that. They all comment on life in post-2016 America, and what's especially interesting is that they all tackle the exact same aspect of it. Instead of focusing on the decayed morals of the leader himself, they explore the most disturbing aspect of his rise to power: That there are people - people we love - that have responded so wholeheartedly to his message of hate, division, xenophobia, and selfishness. 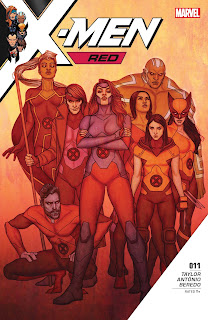 The oldest of these is Tom Taylor's 2018 title X-Men Red, which ran for 11 issues and told a complete story tilted "The Hate Machine." The premise is that powerful telepath Jean Grey, newly resurrected from the dead (again) has a vision of peace and harmony between human and mutant, and then assembles a team to try to carry it out. Trouble arrives in the form of Cassandra Nova, Professor Charles Xavier's evil human sister. She's developed nanite sentinels that invade people's minds and make them hate mutants.

She's also using other methods to sow hate and division. In issue #9 (with art by Roge Antonio and Rain Beredo) Trinary, a character who has the power to control machines, says, "There are so many demonstrably false stories online demonizing mutants. They've been posted and shared and believed despite being complete fabrications. I'm trying to address the false narrative dog whistle politics and hate speech. I'm trying to replace the lies and move the truth to where people will see it."

In the next issue, Nova releases a deep fake video of Jean dismissing humankind, and Trinary says she can disprove it. Storm responds: 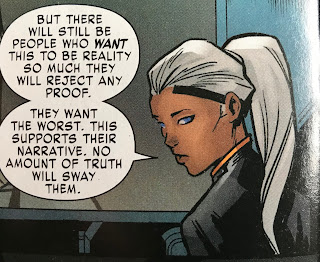 Issue 11 comes on with a slam bang fight (with the Avengers joining Jean's team) and looks like it will wrap everything up in the typical superhero manner, thus belying Jean's whole message of fighting for unity without violence. But this turns out to be smoke and mirrors, as Jean's real purpose is to reprogram a nanite and infect Nova with what she's been missing: Empathy.

In Jean's final speech, she says, "I died. I returned to a world divided. A world where intolerance is cheered. Where ignorance is celebrated. Where rumor is fact and fact is dismissed. I don't believe in this world. I believe in a greater one. We are, all of us, better than this. Stronger than this. Kinder than this." Togetherness is her answer, and this is by far the most hopeful of the three stories. Wonder Twins, a 12-issue DC series by Mark Russell and Stephen Byrne published largely in 2019, takes a much different tone and approach. The book makes a similar point to X-Men Red, but its use of humor and satire actually allows for a darker and deeper message. Issues 10 and 11 concern an artificial intelligence called the Colonel. The Colonel was created in 1986 by a D-List villain called Filo Math, but when he's purchased at an estate sale and connected to the Internet (which he likens to Communism because of its egalitarian nature), he hijacks the digital world. The changes in society have deeply confused him, so he copes by attempting to return the world to its circa-1986 state. For example, he invests all of his new owners' money in Blockbuster stock, and he voids all same-sex marriages.

His mission resonates with white men, who rally to his cause ("I know he's controversial, but Colonel 86 just gets me!") and Lex News (a thinly-veiled Fox News) jumps on the bandwagon ("Is Colonel 86 the best thing to ever happen...or just the bold voice of a forgotten generation?").

Filo himself realizes he has to destroy his creation, saying: "Sometimes...a program just refuses to be updated. It refuses to acknowledge that the world has changed, but assumes the world was at its best when they were at theirs. In a perfect world, we would all update ourselves regularly. And if we can't update the program, then we have no choice but to shut it down."

Repulso, another D-List villain, is called in to disperse the crowds, and offers some food for thought on that same theme: 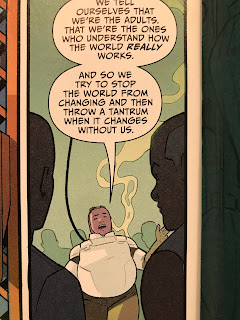 As the events wrap up, the Wonder Twins themselves have this exchange:

Zan: "Wow. For a monster, a lot of people really loved the Colonel."
Jayna: "They never loved him; they loved the monster he allowed them to be." 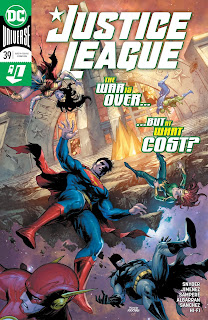 Scott Snyder's and Jorge Jimenez's Justice League epic "Justice / Doom War" built over 39 issues and two years, concluding in early 2020. In the story, an overpowered Lex Luthor frees an ancient god called Perpetua who gives the people of Earth (many Earths) the choice between good and evil. They choose the latter. What could have become yet another story about heroes triumphing through their courage and sacrifice becomes something much more ambiguous. As Martian Manhunter summarizes:

"But now a counteroffer has been made. By a being far more powerful than I. A god who, instead of inspiring you to reach up, tempts you to reach down, into the past, into the basest elements of your nature. She asks that you serve her by serving yourselves. She says there is no him or her or them. For her there is only 'I.' She wants you each to exist like the letter itself. I. I. I. Every life like the thinnest island, floating on its own needs. A line connected to nothing but her."

Like Jayna in Wonder Twins, he realizes, "There is no beating her. She is always there. In the flesh, the bone. The swirling dust. Forever whispering...but what she speaks to in us, the worst parts, those are what make things like generosity, compassion all the more powerful."

The Manhunter makes a strong telepathic appeal for people to reconsider their choice, but... 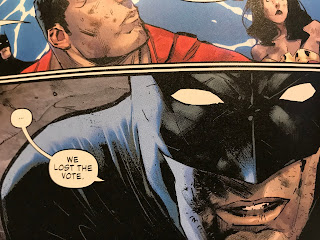 Perpetua says, "See, I wanted you to make your case to humanity. I wanted your plea to be full-throated, to have the chance to side with you. You spoke with them because I allowed it. For in the end... I knew they would choose me."

As the story ends, the heroes lose this particular battle. "The rise of evil in this universe, the lack of connection between the good" make Perpetua too powerful. The heroes are told, "The universe has been divided by evil, and in division comes fear, anger, and disillusionment. No single action or wonder or victory can correct such a tide."

The story will likely continue in Snyder's next big DC project, but for now he recognizes there are no pat answers.

I didn't look up any sort of online reaction to these stories, but I can guarantee you that there were angry fans who decried the writers for inserting liberal politics into their stories. There's a small but vocal segment of backwards-looking comic fans (I won't invoke their name for the same reason I won't invoke the name of the man they admire, because names have power) who vociferously condemn anything and anyone they can define as a "social justice warrior." A group of "fans" who get deeply angry about heroes fighting on behalf of empathy and unity proves the very point each of these three writers so elegantly made.

I wish I had some answer for how to deal with the fact that our mothers, fathers, friends, etc. have given into that monster inside of themselves, but the conclusion that hews most closely to my own feelings and outlook is the non-resolution of the Justice League story. There's clearly no pat answer or singular victory to be won. The story goes on, and the conflicts within it are not going away, even when President Supervillain does. 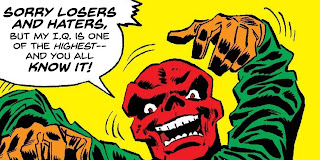