In Review: Looking for Calvin and Hobbes 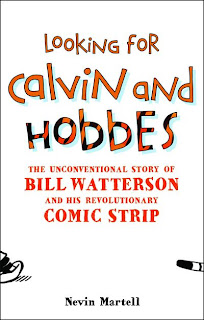 When I was about 12 years old I told my grandpa that I was going to take over Calvin and Hobbes when Bill Watterson died. In an especially bitter moment, he gently chastised me, saying that it was likely that his family would take it over, and that Watterson probably wouldn't want anyone else to draw it anyway. Now I know for a fact my grandpa knew nothing about Bill Watterson, but damn if he wasn't right. Watterson HATED legacy strips, and felt he was the only one who could ever tell Calvin and Hobbes' story.

That's just one thing I learned in Nevin Martell's new book, Looking for Calvin and Hobbes. The book is subtitled "The Unconventional Story of Bill Watterson and His Revolutionary Comic Strip", and true to that it's part biography and part love letter. Anyone who fell under the trance of Watterson's comic strip will find lots of interesting tidbits about its origins and author.

That's the good part. Martell's research is above reproach. He interviews more people than anyone else would consider necessary and gets them to open up. He goes to Watterson's hometown of Chagrin Falls, Ohio. He visits Ohio State University's Cartoon Library and Musuem, to which the cartoonist donated ALL of his original Calvin and Hobbes strips. He even calls Watterson's mother on the phone.

Though the book isn't a strict biography, Martell does a good job of presenting the basic facts about Watterson's youth and development, the journey he took to create Calvin and Hobbes, his reaction to his success, and what he has been doing in the 14 years since the strip ended.

But the book is nonetheless problematic. Let's break it down:

1) Martell sets up his book as a quest for an interview with the notoriously press-shy Watterson, something that you know is not going to actually happen. If it had, the book would have been called Finding Calvin and Hobbes. It's a lame attempt to create drama. And though I think Martell's quest was a doomed proposition (by all accounts Watterson wants Calvin and Hobbes to speak for itself and is uninterested in rehashing the past any more than he already has), he didn't help himself with the way he went about his request. Included in the book is the text of his interview-request letter, and it's pretty lame and embarrassing, sounding like it was written by a gushing fanboy. I wonder if Martell would have had more success by asking Watterson if he'd talk about everything BUT Calvin and Hobbes.

In the absence of Watterson, we get Martell's rehashing many of his past interviews and speeches, and this is valuable. But Martell also chose to quote generously from Watterson's various introductions to Calvin and Hobbes collections. This feels unnecessary, and a little bit like cheating.

2) When doing anything other than presenting the results of his interviews and research, Martell's writing voice is awful. In a very curious move, he regularly interjects his own opinions and experiences into the story. That would be fine for an introduction, but Martell seems to believe that his own superfandom of the Calvin and Hobbes affords him a large place in the strip's story. It doesn't. I'm okay with when it's relevant, such as when he describes his experience looking at Watterson's original artwork at OSU. But when it comes to describing his desire for an eternal summer, or comparing his father to Calvin's father, or talking about his writing process, it's just distracting. Throughout, he peppers his writing with dorky, awkward references to things like "the trixster god Loki", Jessica Biel, and American Idol (ironically, this is something he praises Watterson for not doing). This type of writing has its place, but not in a biography.

3) Similarly, Martell constantly tries to philosophically analyze various Calvin and Hobbes characters, situations, and running gags. This would admittedly be less annoying had he actually had permission to print the strips in question, but even so, he rarely offers anything insightful. It's all cliched platitudes such as, "Of course, no young boy's life would be complete without a secret club." And really, I mean, I agree Calvin and Hobbes was a great comic strip, but do we need to elevate it to "Bill Watterson is the most brilliant pop artist of the late 20th century" levels?

You can also tell that Martell has worked as a rock critic, and is used to substituting laborious comparisons for actual descriptions. Check out his summary of Richard Thompson's comic strip: "Cul-De-Sac looks like Ralph Steadman and Charles Schulz fighting over a pen to draw The Yellow Kid crossed with FoxTrot, with a dollop of Watterson's wit thrown in for good measure."

One can't help but wish that Martell had worked with a stronger editor, someone who could have saved him from his self-indulgences and organizational challenges. I hate books like this, because you just know it could have been so much better, but you can't dismiss it outright because hiding in the mess a lot of good information.

So should you read it or not? If you want to know more about the story behind Calvin and Hobbes and its creator, Martell's book is basically the only resource you'll find. So I don't regret reading it. Even so, I can't shake the feeling that I probably would have gotten more out of taking all of my old Calvin and Hobbes collections off the shelf and rereading them from beginning to end.
Posted by Paul V. Allen at 2:40 PM No comments: