A Show of Force 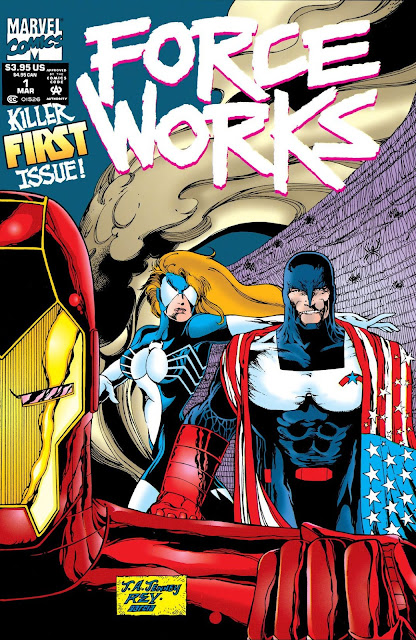 Force Works #1
Writers: Abnett and Lanning
Penciller: Tom Tenney
Inker: Rey Garcia
Colorist: Joe Rosas
*
At the risk of beating a dead horse, I need to say it again: The massive success of Rob Liefeld and Image comics had a seismic impact on the superhero comics industry, both from a business standpoint and a creative one.
On the latter, there were two main responses. Books either tried to define themselves against what Image was doing (a la 1963 and the Ultraverse), or they tried to imitate it.
While DC dabbled in both approaches, Marvel almost exclusively took the latter route. Like a jilted lover who just can’t get over the one who spurned him, Marvel couldn’t move past the success of Liefeld and X-Force. So they just kept trying to recreate it, resulting in them subjecting some of their most prominent team books to what I call "the Force Treatment."
The Force Treatment is where a previously happy-go-lucky superhero team is broken down to the basics and then rebuilt as a para-military unit “designed to take out threats before they become threats” and/or “to operate outside of the rules.” Of course this is what had happened to the New Mutants as they morphed into X-Force, and it appears that both Marvel and DC misunderstood why exactly that had been exciting to fans. Sure there was a lowest-common-denominator contingent who liked the violence and guns and aggressive attitude, but most fans found the New Mutants becoming X-Force exciting because it was unexpected, and because Liefeld’s art was so radically different from everything else at the time. So they were trying to create imitations of something that had been appealing because of its novelty.
Here’s where a not-so-brief digression into the phenomenon of the Liefeld imitator might be warranted. A byproduct of the young artist’s ascent to stardom was that artists both up-and-coming and already-established tried their hand at mimicking his style. None, in my opinion, did it with any degree of success. Liefeld’s approach was so idiosyncratic that only he could make it work. It’s said that if you copy someone else’s work you end up copying their bad habits, and Liefeld had a lot of bad habits.
Though DC and Marvel each had their share of Liefeld clones – which we’ll discuss soon – perhaps the strangest aspect of the whole thing was that Liefeld himself hired an army of these imitators to work for him on his various Extreme books, including Jeff Matsuda, Chap Yaep, Dan Fraga, Marat Mychaels, and Mark Pacella.
Perhaps the most famous case of an artist catching Liefelditis was when veteran penciller Herb Trimpe began imitating the style. Trimpe had worked for Marvel since the late 1960s, most notably on a run of the Incredible Hulk that introduced the character of Wolverine. Trimpe’s style was very much in the Buscema-by-way-of-Kirby Marvel house style that dominated the company throughout the late 1960s and into the 1980s. But with the debut of 1993’s Fantastic Four Unlimited Trimpe was suddenly drawing like Liefeld. Fans assumed he’d been forced to do that, but the artist did it of his own accord, hoping it would lead to more work for him at a time when older artists were being cast aside (Trimpe's heartbreaking account of the demise of his professional career was published in the New York Times). 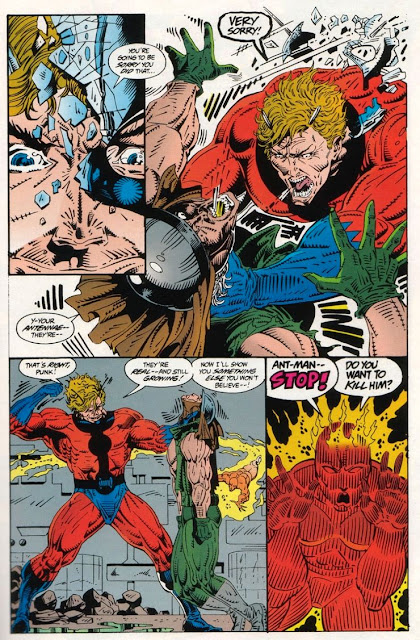 So, as flawed as the logic was, part and parcel of the Force Treatment was finding a Liefeld-lite artist to draw it. The first attempt at the Force Treatment was actually made by DC in the 1992 Titans Hunt storyline. DC tried to hire Liefeld himself to take over the New Titans and do what he’d done to the New Mutants. The deal fell through, but it eventually resulted in the Team Titans, a bloodthirsty strikeforce with a grizzly big-gun-toting leader. The art on the first few issues of that series was by Kevin Maguire, whose clean, classic style that blunted the perception of the book as an X-Force rip-off.
Companies got less subtle as time went on. In January of 1994 Marvel published the final issue of Avengers Westcoast. The book had run for many years chronicling the adventures of an Avengers team based in California. The team’s roster varied, but consistently included big-name characters such as Scarlet Witch, Vision, Hawkeye, Iron Man, and Wonder Man. The final issue found the team being disbanded against their will, with Captain America and the Vision upbraiding the members for poor decision making. With unresolved feelings still lingering as a result of Operation Galactic Storm, Iron Man decides to form his own team rather than be reincorporated.
With Scarlet Witch, U.S.Agent, Spider-Woman, and Wonder Man in tow, he forms Force Works, the first and only superhero team whose name doubles as a sentence. The team’s mission is laid out by Iron Man right away: 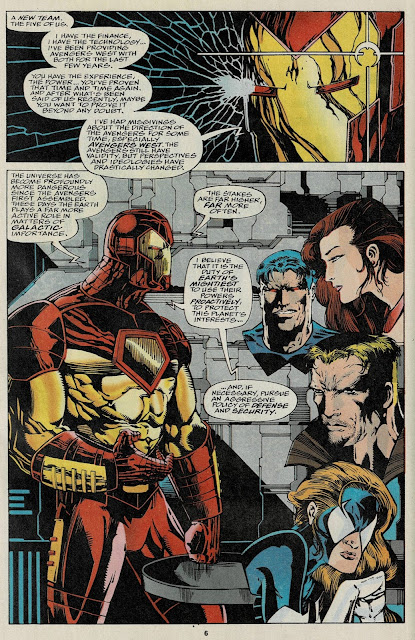 There you have it: "An aggressive policy of defense and security."
And if you took a gander at that art you’ll realize that Marvel found a suitably Liefeld-esque artist to work with writers Dan Abnett and Andy Lanning. His name was Tom Tenney, and he had just a couple of credits to his name before getting the Force Works gig. As far as Liefeld clones go, Tenney at least showed some signs of individuality. He clearly had some other influences, like Jae Lee and Liam Sharpe. Unlike Liefeld, he seemed to actually enjoy depicting background detail, and his storytelling wasn’t bad. He had the potential to grow into a formidable superhero artist, but that wasn’t to be. Tenney only stayed on Force Works for four issues, and then fulfilled his destiny by going to work for Liefeld. After a couple of brief assignments at Image, he disappeared from the comic book industry.
In a lot of ways, his story is the story of the mid-1990s in comic books: New artists showed up out of nowhere, worked in the industry for a year or two, and disappeared. This was a direct result of a dearth of talent at the Big Two.
As Kim Howard Johnson outlined it in a lengthy July 1993 Comics Scene article, there were three challenges facing Marvel in terms of recruiting talent. One was diminishing royalties due to lower overall sales. Another was the fact that Marvel had become extremely gun-shy about promoting its artists, lest they develop a high profile and then leave for Image or some other company willing to throw them a bunch of money. And the final factor was that Marvel couldn’t offer ownership of anything the artist or writer created themselves. These circumstances, combined with the fact that so many established artists were being pulled away to other companies (Valiant, Malibu, Defiant, Image), created a vacuum that was filled by untested young artists.
*
Force Works was an intriguing book, but never overcame its lack of originality. The new member of the team, Century, had an ugly design and failed to make much of an impact. But in the hands of more solid and experienced artists, like Paul Ryan on issue #5 and David Ross on issues #13 and 14, the book flashed its potential. Writers Abnett and Lanning, of course, would go on to better things, creating the version of the Guardians of the Galaxy that James Gunn translated to film.
Other books got the Force Treatment in short order. In November 1994, Marvel introduced Fantastic Force, but they didn’t quite follow the rules. While the group was an “extreme” version of the Fantastic Four, it didn’t replace the original title or feature any members of that team. Instead it focused on a future version of Mr. Fantastic and Invisible Woman’s son Franklin, a warrior named Huntara, an Inhuman shapeshifter called Devlor, and hot-headed Wakandan Vibraxas. Artist Dante Bastianoni was - wait for it  - a newcomer, and he wasn’t a Liefeld imitator. His art was more reminiscent of Patrick Oliffe or David Ross, though not as fundamentally sound as either of those. The book's biggest debt to Image was in its ugly costume designs.
Over at DC, the Justice League split into three teams each with their own book. Justice League Task Force took a Mission: Impossible approach, with Martian Manhunter picking the best team for each crisis (it sounds cooler than it actually was). Justice League America focused on Wonder Woman, Flash, Hawkman, and a few lesser-known heroes doing the typical superhero thing. And then there was Extreme Justice. Though it was a slight breach of etiquette by DC to not use “Force” in the title (Justice League Task Force had preempted that) it was the Force Treatment in every other way. In the series, a group of Justice Leaguers – Captain Atom, Maxima, Amazing Man, Blue Beetle, and Booster Gold – break off from the main team because they feel hampered by the constraints of the United Nations and want to administer “extreme justice” to bad guys in other countries. The art on the series was initially provided by Brazilian Marc Campos. Campos has said that he was encouraged by DC editorial to draw in Liefeld's style, and that it wasn’t natural for him. 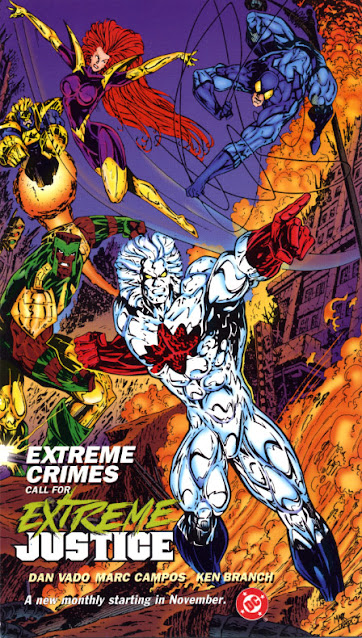 One final aspect of the Force Treatment is that death of a major character had to be involved somehow. Fantastic Force grew out of Mr. Fantastic’s apparent demise. For Extreme Justice, it was Ice, who had been an integral part of the beloved Giffen-DeMatteis-Maguire Justice League. In the first issue of Force Works, Wonder Man is killed. Of course, these deaths were short lived, just like the careers of the artists who drew them, and the titles themselves. Force Works lasted 22 issues. Fantastic Force, 18. Extreme Justice, 19. Proven commercially unsustainable, the Force Treatment was mercifully abandoned as a go-to move.
As for the Liefeld clones, it’s worth mentioning some grew into respectable talents with their own unique styles, including Brandon Peterson, Dan Panosian, and Mike Dedato Jr. Marc Campos would go on to have a long career at DC, mainly as an inker.
Works Cited:
“Extreme Crimes Call for Extreme Justice.” https://www.cosmicteams.com/jla/_chron/extreme-justice.html
Johnson, Kim Howard. “Crisis of Infinite Comics.” Comics Scene #35 (July 1993)
Posted by Paul V. Allen at 12:40 PM