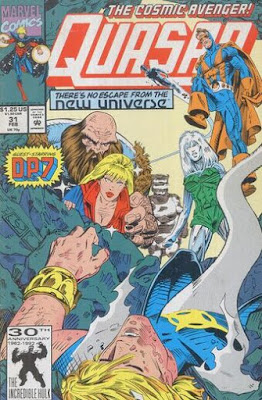 Reading monthly comics you become conditioned not to expect each individual issue to cover much territory on its own. You accept that you’re buying a part of a larger story. It might be enjoyable, but you don’t expect it to feel like a complete reading experience in and of itself. Of course there are the occasional standalone issues, which can be good, but aren’t inherently better by virtue of being self-contained. The rarest unicorn of all is the single issue that is part of the larger tapestry but still feels complete in-and-of-itself.
Quasar #31 is one of those unicorns. It’s an act of magic that is and does things it shouldn’t be able to be or do. It’s a standalone story that’s part of a larger narrative. It ties off its plot threads but opens up many others. It makes Marvel’s much maligned New Universe seem like an intriguing place. And it deepens your sympathy for, understanding of, and admiration for its main character.
As a teenager I loved Mark Gruenwald’s Quasar, concerning a former Army officer who is assigned to be “Protector of the Universe” by a godlike being called Eon. It was one of the first books that I collected on a regular basis. I jumped on at #17, just one issue before a new-to-the-business penciller named Greg Capullo became the book’s regular artist. The book had been fun up to that point, but Capullo took it to the next level. It’s example #1,998,312 of the difference a good artist can make (Gruenwald’s writing career, for whatever reason, demonstrates this better than most).

The Gruenwald/Capullo team lasted nearly two years, and of their run, this (mostly) standalone issue fascinated me the most. I read it over and over again.
The story finds Quasar hopping dimensions in search of seven counterparts of a villain named the Living Laser. In the midst of this mission he runs into a version of his enemy Maelstrom, who seemingly blasts Quasar out of existence. In reality, he’s been sent outside of the dimensional multiverse, into the world of the New Universe. That’s right, Marvel’s 1986-1989 alternative line of comics that to this point had not been connected in any way to the mainstream Marvel universe. There, Quasar runs into the members of D.P.7, which just so happens to be the team that Gruenwald co-created (with artist Paul Ryan) and wrote about for its entire 32 issue New Universe run.

I should be clear that I hadn’t read any New Universe comics at the time I first read Quasar #31, and I wouldn’t read them until much much later. But that lack of familiarity didn’t hamper my enjoyment at all; actually the fact that these characters were so odd and foreign to me increased the story’s effectiveness.

Now that I have read it, though, I’m fascinated by some of the choices Gruenwald made in regards to D.P.7. We only see the team for a few pages, but they’re not in the same place they were at the end of their series. In D.P. 7 #32, Jenny Swenson – Chrome – had seemingly decided to give up her powers. But here she clearly still has them. Jeff Walters – Blur – had left the team, but is back with them here. And they have a new member named Chris (he’s young, and has a “flying hubcap," and is apparently a comic book fan) who appeared in the 1988 special The Draft but who wasn't with the team at the close of the original series. 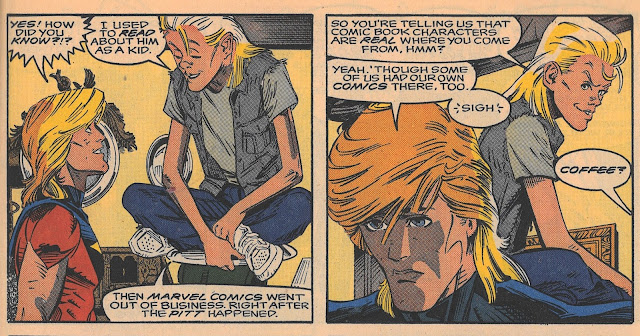 Gruenwald was well-known as a master of (and a slave to) continuity, so these were clearly intentional choices. The letters page of D.P.7 #32 mentions that a “graphic album” featuring the team was forthcoming, but that never materialized. Perhaps these changes would have occurred there.
Was it self-indulgent for Gruenwald to bring the team he co-created (with artist Paul Ryan) into the Marvel Universe? Maybe, but damn if it doesn’t work. This is mostly because the issue isn’t just a nostalgia trip. Gruenwald uses the New Universe to deepen the character of Quasar, and to seed plot points with both short and long-term repercussions.

The former first. After meeting with D.P.7, Quasar quickly determines that he needs to seek out the Star Brand, a sort of tattoo that grants its wearer god-like powers. In New Universe continuity, the Brand had been wielded by a man named Kevin Connell, but through a series of increasingly odd events that I won’t detail here, it ended up with a fighter pilot called Jim Hanrahan. Quasar goes to Jim’s house and tries to convince him to help. Jim refuses to use the power, claiming “If I never use the thing, I can never misuse it.”

Quasar, realizing what a burden this is for Jim, offers to take the Star Brand from him. But Jim, understandably, isn’t at all sure he wants to give it up to a random stranger. So Quasar proposes they talk until Jim feels convinced. 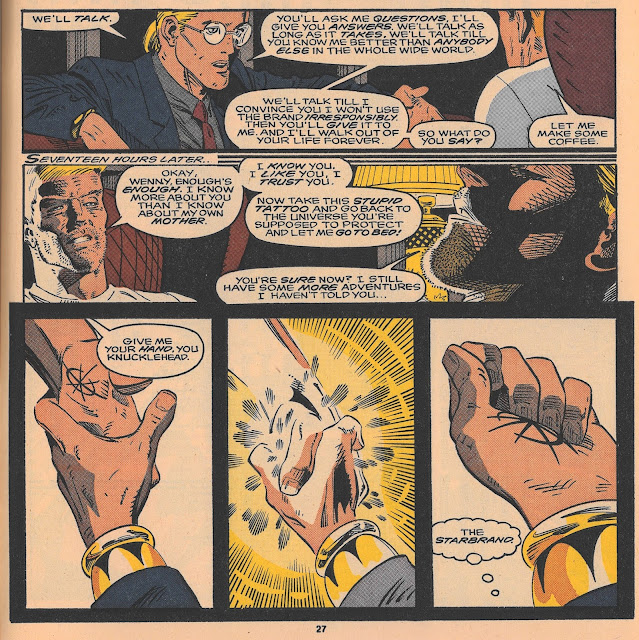 I always loved this sequence, for just how much it covers in the space of a few panels, and for how Capullo executes it so perfectly with his use of expression and rendering. It’s a microcosm of the issue as a whole, showing just how unlimited the potential of comics storytelling really is.
Quasar taking on the Star Brand would not only serve as a way to get him home, but as a long-term plot in Quasar, leading all the way to the 1994 "Starblast" event. The surprise "stinger" in the book's last panel (which finds one of Antibody's mini-mes having stowed away with Quasar) provided the impetus for events in issues 45 and 46, in which the little guy gets big and angry.
Gruenwald was also ahead of his time here. In 2013 writer Jonathan Hickman introduced New Universe concepts, including the Star Brand, into his run on Avengers. Current Avengers writer Jason Aaron has taken that baton and run with it. James Robinson’s 2016 take on Squadron Supreme included former D.P.7 member Blur on the team.

Speaking of Squadron Supreme, nothing in Gruenwald’s writing career can match his work on that series (which I wrote about on this very blog), but Quasar #31 comes damn close.

Gruenwald passed away much too early, succumbing to a heart attack in 1996. Besides Squadron Supreme, D.P.7 and Quasar, his signature achievement is an as-yet-unbeaten 10-year run as writer of Captain America. Quasar was a launching point to stardom for Capullo, who went on to pencil X-Force, Spawn, and, more recently, Batman and the Dark Nights miniseries.
Posted by Paul V. Allen at 12:40 PM