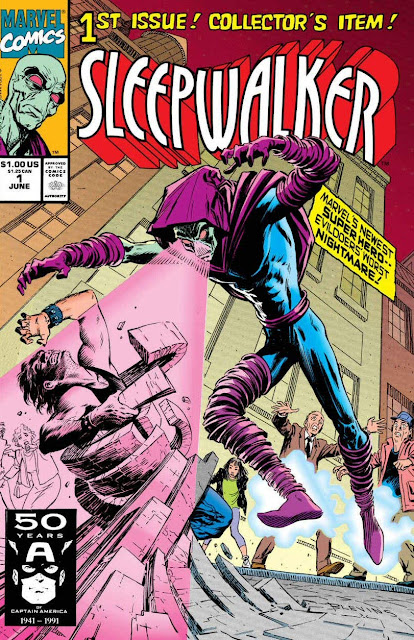 After the success of the “Heroes for the 1990’s” initiative in 1990, Marvel repeated it in 1991, introducing seven new ongoing series between March and October. Like the first go-‘round, the slate included a mix of new heroes (Darkhawk, Sleepwalker), revived heroes (Deathlok, Wonder Man, X-Force), a new series for an old favorite (X-Men), and a licensed property (The Toxic Avenger). Like the card-carrying Wild Agent of Marvel I was, I bought every single one of them, even The Toxic Avenger, though it’d be a year or so before I actually saw the movie (on USA’s Friday and Saturday night b-movie trashfest “Up All Night”).

X-Force and X-Men were the big stories of the year, thanks to their massive sales. X-Force #1 became the best-selling comic of all time in August with five million sold, at least until X-Men #1 broke the record two months later, selling an uncanny 8 million, a record that still stands today. But we’ll hear more about that in a few essays.

It’s easy to make these gaudy numbers – and the gaudy gimmicks that drove them; X-Men #1 had six different covers – the main story. But there was another story standing off to the side, one in which Marvel was still taking chances on new characters, even if they were in the mold of their older ones. Even as the revolution went on around them, Darkhawk and Sleepwalker were both very much conceived and executed in the classic merry Marvel manner.

If Darkhawk - the story of a teenage who finds an amulet that allows him to switch places with an android warrior - was a riff on Captain Marvel (both the DC and original Marvel versions), Sleepwalker had the spirit of Steve Ditko’s ’60s work at Marvel. It was a combination of Doctor Strange’s far-out-ness and Amazing Spider-Man’s angst with a dash of the “Marvel Monsters” of the 1970s. Truth be told, I liked Darkhawk more as a kid, but Sleepwalker stands out more now, not only for its peculiarity but also for its creative team.

Sleepwalker was dreamed up by writer/artist/editor Bob Budiansky. Budiansky is a Bronx native who came to Marvel in the late 1970s, starting as an editorial assistant, then becoming  cover artist on the Johnny Blaze Ghost Rider series, eventually taking over penciling duties on the last dozen issues of the title. In 1983 he became a full editor, and the following year an unlikely project fell in his lap. Hasbro approached Marvel about making a comic book to go along with a newly-acquired Japanese line of robot toys they were calling Transformers. Budiansky ended up working off of Jim Shooter’s initial treatment, naming the characters, giving them personalities, and writing the comic that introduced the Transformers mythology as we know it. 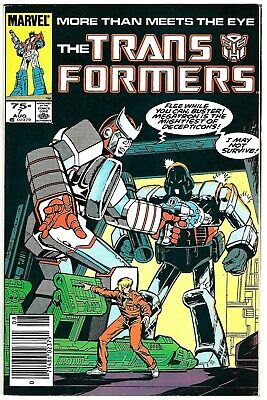 In the early 1990s Budiansky began to tire of writing Transformers, and returned to an inspiration he’d had since the late 1970s of a “traditional superhero, but with a twist…in this case he was a bug-eyed alien.” (Marvel Age 100) The concept was that the Sleepwalker was one of a race of protectors that dwell in the Mindscape. While protecting film student Rick Sheridan in a dream, he becomes trapped in Rick’s mind. He can emerge into our world when Rick falls asleep, and use his reality warping powers to fight crime and other menaces.

Budiansky's first choice for his artist also happened to have share an alliterative “b” name, Bret Blevins. An Arizona native, Blevins broke into comics in the early 1980s, starting out by doing Marvel Super Special adaptations of some of your favorite childhood films: The Dark Crystal, Krull, and The Last Starfighter. He next co-created the Epic series The Bozz Chronicles with writer David Micheline, and then bounced around on various projects before landing on New Mutants. He had a nice run on the title, until he was cleared off to make way for Rob Liefeld, as discussed in essay #5. Blevins's impeccably drafted, expressive, shadow-heavy work was a throwback to masters like Alex Toth and Joe Kubert. The fact that this was regarded as stale on New Mutants says a lot about how views of comic art were changing in the 1990s. It also shows just how powerful the hunger for something new and different was, to the point that very talented artists were pushed aside for rawer, less experienced ones.

Blevins career was far from over, though. He went on to do an Inhumans graphic novel and other random work until Sleepwalker came along. His art was a perfect fit for the moody nature of the title, especially when he was able to ink his own work.

Budiansky’s stories were very much in the vein of early Amazing Spider-Man issues, introducing a parade of colorful odd new villains such as 8-Ball, the Chain Gang, Cobweb, Lullaby, and Spectra, while at the same time throwing Rick Sheridan's personal life into turmoil because of his superhero secret. Sleepwalker himself was, like Spider-Man, constantly misunderstood and cast as a villain. The title was unique in that it essentially had two interconnected leads who couldn’t communicate save through drawings and answering machine messages (and the occasional dream invasion).

Like The New Warriors one year earlier, Sleepwalker was a surprise hit, an accomplishment perhaps even more impressive because the character was 100% new. 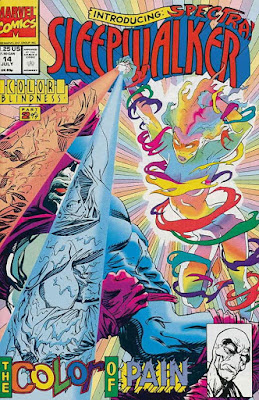 Blevins stayed with the book until issue 17, only needing to be spelled twice by guest artists – Rick Leonardi and Joe Quesada (who as far as fill-in artists are concerned are not too shabby). He went on to do a brief run on Ghost Rider before jumping over to DC to work on Batman: Shadow of the Bat. He’d exit comics almost completely in 1996. In a 2018 interview he reflected on that decision: “I’ve always loved comics, obviously, but the industry downturn of the mid 90’s seemed like a good reason to try something else, and I was ready for new challenges at the time anyway, I think.” (Newsarama)

He went on to become a storyboard artist for DC’s excellent animated universe on shows such as Superman: The Animated Series, Batman Beyond, and Justice League, winning two Emmys in the process. He’d return to comics sporadically, most notably in 2018 on DC’s Harley Quinn title, and on writer Joe Keatinge’s Image series Stellar.

Sleepwalker continued on with California native Kelly Krantz joining as series artist. His work was – like many artists who entered the comics industry in the mid-1990s – highly indebted to Rob Liefeld’s style. And though Blevins left of his own accord, it was an odd echo of his New Mutants departure. In this case, however, it had the opposite effect. Sleepwalker’s sales began to dwindle, and Budiansky was unhappy with the new look of the book. It would be cancelled in 1994, ending with issue 33.*

The end of Sleepwalker also marked the end of Bob Budiansky’s career as a comics writer. He continued on as editor for a couple years and was then a victim of the 1996 Marvel layoffs that foreshadowed its bankruptcy filing. He got a job as an assistant creative director at Scholastic doing graphic design, and has gone on to run the recreation department for his small town in New Jersey, planning Easter egg hunts, holiday celebration, and managing programming for seniors and summer camps. He's a regular at both comics and Transformers conventions, and also does art commissions

Sleepwalker has rarely been seen in comics since outside of a four-issue 2018 miniseries tied into the Infinity Wars event, and a humorous one-pager Budiansky wrote and drew for Marvel Comics #1001. Recently, two independent filmmakers released a Sleepwalker fan film. Check out an article and link here.
The book and character stand today as not just objects of nostalgia for "old" fans like myself, but as reminder of the two extremes of the 1990s. There's the overlooked fact that despite the characterization of the era as a time when everything was burned to the ground, the 1990s was still a place for new characters and books that honored the tried-and-true superhero formula. But at the same time, many of the writers and artists responsible for those books - like Budiansky and Blevins - made their last stands in the 1990s, with the industry essentially driving them away.
*Krantz was one of many Liefeld-esque artists who broke into the Big Two but weren’t able to form a lasting career. In fact, save a couple of issues worth of work at independent companies, Sleepwalker is the entirety of Krantz’s comics career. He now makes his living as a tattoo artist.