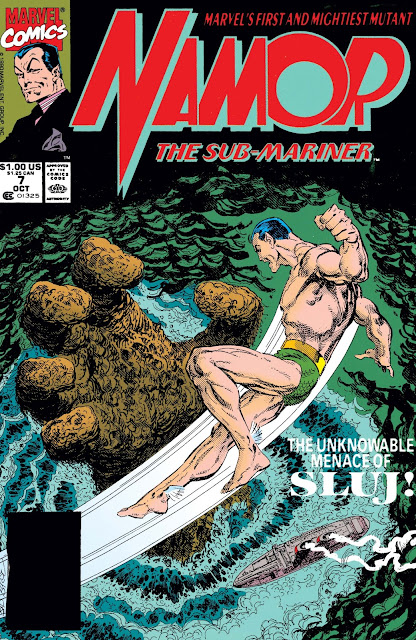 This essay is the first of a two-parter. The first part is the nice part.

My early comic book purchases were made on instinct with little rhyme or reason. I bought based mostly on curiosity about a certain character or group of characters, and honestly whether or not I liked the cover. I didn’t pay attention to who was writing or drawing the books. That all changed when I discovered John Byrne’s work. He was the first comic book artist whose style I recognized on sight, and he was the first comic book artist I loved.

He drew faces like no one else: squinty-eyed, dimpled, with expressive mouths. His men were lean and muscular but not in an exaggerated way. His women were beautiful. His version of a character almost invariably became the iconic version of that character, at least in my mind. He placed his figures in realistically-rendered settings, which made the fantastic elements all the more fantastic. He was a writer, too, which put me even more in awe of him.

My first Byrne comic was an issue - I can't remember exactly which one  - of Avengers West Coast, somewhere in his 1989-1990 15-issue stint as writer and artist. Those 15 issues were the first comic books I consciously set out to collect. And because of that, my love of John Byrne is inextricably connected with my love of comic book shops.

After my first comic book purchases in late 1989, I began making beelines to the comics spinners and racks in every drug store, grocery store, and gas station I found myself in.

And then I discovered there was such a thing as a comic book shop.

In Jimmy Gownley’s 2014 graphic novel The Dumbest Idea Ever there’s a scene in which the main character enters a comic shop for the first time. Gownley presents it as akin to the switch from black and white to color in film version of The Wizard of Oz. That was exactly it for me. Walking into a comic shop for the first time was like entering a magical new world, and I was overwhelmed. Stepping into Metropolis Comics in Normal, Illinois – at that time located in an odd little strip of businesses on Main Street, I saw a long wall full of new comics, including dozens of titles I’d never seen before. In the back there were white boxes filled with older issues.

This was a time before superhero ubiquity, so seeing a place filled with them, including posters on the wall and t-shirts, was mind-blowing. I couldn’t believe a place like this existed. On that first trip, I was thrilled to find Avengers West Coast 56 (March 1990) to add to my collection. And it’s not an exaggeration to say that John Byrne’s work is responsible for me becoming a collector. Because after I completed my set of Avengers West Coast, I set my sights on other Byrne comics. And there were a lot of them! 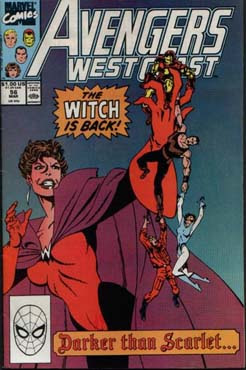 After discovering Metropolis, comic shops became second homes to me. I sought out stores in every new city I found myself in. No two were ever alike, except that they always made me happy. My mom and step-dad especially were gracefully indulgent of this, often enduring burned-out neighborhoods and wrong turns to find a specific shop, not to mention sitting in the car or waiting to the side patiently while I looked through the wares.

Some of my best memories of visiting these comic shops were of finding John Byrne comics for my collection: A few key issues of Fantastic Four at the impressive Tomorrow is Yesterday in Rockford. The six-issue Man of Steel miniseries, purchased for me by my Grandpa Allen at a dusty little store in Mount Zion. 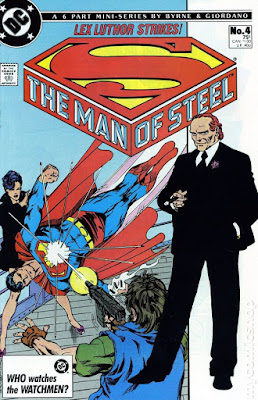 John Lindley Byrne was born in England in 1950 but moved to Canada when he 8-years-old. After high school he attended Alberta College of Art for a couple of years and some change before dropping out to focus on breaking into comics. It didn’t take long. His first professional sale was actually to Marvel, illustrating a back-up story by Tony Isabella and David Anthony Kraft that would eventually be published in Giant-Size Dracula #5 in June 1975. By that time Byrne had started doing work for Charlton Comics, illustrating a handful of their TV tie-in titles and co-creating Doomsday +1 with writer Joe Gill.

He headed to Marvel next, and did runs on Iron Fist, Champions, and Marvel Team-Up. He was often paired with writer Chris Claremont, who was just a couple of years into what would become an epic stint on Uncanny X-Men. Byrne joined Claremont on the title with issue 108 and would stay for four years. The pair’s time on the title was remarkably popular and remarkably memorable, culminating in the twin classics “The Dark Phoenix Saga” and “Days of Future Past.” Byrne became one of the few genuine superstar artists in the business, and would inspire many a young artist - both Todd McFarlane and Rob Liefeld would cite Byrne as a primary influence.

Byrne didn’t write Uncanny X-Men, but he served as co-plotter and reportedly clashed often with Claremont over matters of characterization. So on his next major work he took over as both writer and artist, resulting in a legendary five-year run on Fantastic Four. From there he did a couple of years on the X-Men spin-off Alpha Flight, and then made the big leap to DC, where he revamped Superman after Crisis on Infinite Earths. Two years working on Superman and Action Comics left Byrne feeling a lack of “conscious support” from DC, and he headed back to Marvel.

There, he worked on the New Universe title The Star Brand, kicked off a new She-Hulk series (notable for its comedic, break-the-fourth-wall approach), and settled on to Avengers West Coast, where I came in. Though I’d begun by this time to gather up his older work, Byrne’s next project was the first one I got to experience from the beginning. His take on the ocean-faring 1930s character Namor the Sub-Mariner debuted in April 1990 as part of the "Heroes for the 1990’s" initiative that gave us the subjects of our previous two essays, New Warriors and Spider-Man.

Namor was not a character I had much interest in, but with Byrne writing and drawing, I was all-in. There’s nothing particularly special about #7 of the title, but it does serve as a good overview of what Byrne tried to accomplish with the book, both as a writer and as an artist. Byrne repositioned Namor as not an undersea king, but as a corporate CEO, funded by sunken pirate treasure. There was a vague environmental message in the early issues, present here in the “Unknowable Menace of Sluj” but mostly Byrne was interested in corporate intrigue, personified by filthy rich twins Desmond and Phoebe Mars. Honestly, I was more interested the later issues that reunited the World War II era team the Invaders. But the art. Oh the art.

As happens with many artists, Byrne’s work evolved and became more stylized over time. His X-Men work (inked by Terry Austin) is often held up as a gold standard, but from a drafting standpoint it wasn’t as accomplished as Byrne’s work would later become. His 1980 9-issue run on Captain America showed great strides, and that continued throughout his years on Fantastic Four and Alpha Flight, on the former he began inking himself, and this hit the sweet spot of draftsmanship and rendering.

By the time he reached Namor he was at the height of his powers, and for a large chunk of issues he upped the ante by his use of Duo-Shade. Duo-Shade was a special drawing board with a diagonal line pattern printed directly on. After drawing on the board, the artist could apply a clear solution wherever he or she wanted shading to appear on the final art. The results were striking, unlike any comic book art I’d seen before. It blew my young mind (when I started making my own comics a few years later, I tracked down some Duo-Shade for myself). Even looking now, I still would hold it up as some of the best artwork Byrne has ever done. 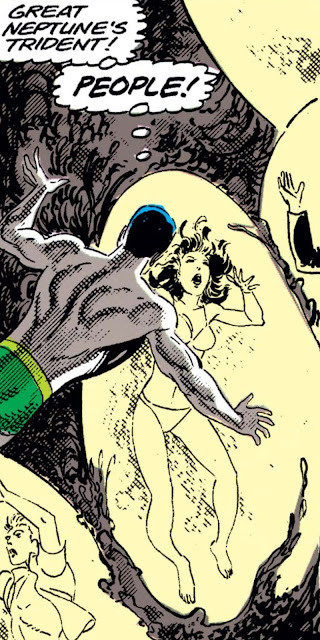 I’d remain steadfastly dedicated to John Byrne’s work throughout the 1990s, but as with many great love there would be a few too many bumps in the road to a bitter divorce. If you can marshal your patience and wait for a few years’ worth of essays, I’ll tell you all about it in Part 2.